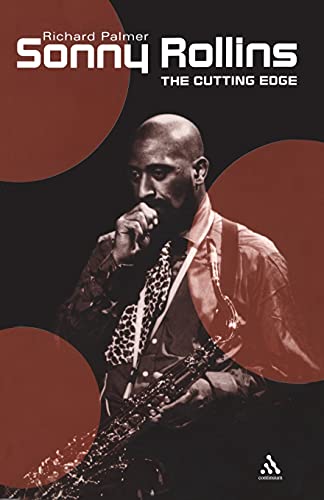 Besides being one of the most influential tenor saxophone players in jazz history, Sonny Rollins also happens to be one of its most enigmatic figures as well. Given his introspective nature and penchant for withdrawal, Rollins easily comes across as somewhat of an existentialist. Now British jazz writer Richard Palmer presents a worthwhile look at the musical life of this legendary artist with Sonny Rollins, The Cutting Edge.

Walter Theodore “Sonny” Rollins started playing saxophone as a child and began gigging professionally during his high school years. While he definitely exhibited talent and genuine natural ability, he wasn’t completely certain that he wanted to pursue music as a career. Fortunately he didn’t give up and quickly made a name for himself. His early work with artists such as Miles Davis, Clifford Brown and Max Roach brought him to prominence and made him a major figure in contemporary jazz. Many of his original compositions, such as Oleo and St. Thomas have since become jazz classics. Also many of Rollins’ albums, including Saxophone Colossus and Way out West are practically essential to any jazz collection.

Palmer provides an exceptional study of Rollins’ musical life and contributions. Longtime fans as well as those who are just developing an interest in Rollins will find plenty for consideration. Those hoping for an in-depth Rollins biography, however, might have some reservations. While Palmer does offer biographical information, the real emphasis of this work centers on Rollins’ music. To supplement this, he also considers historical and cultural elements, such as Vietnam, rock and roll, and the civil rights movement. While these elements may not appear directly related to Rollins’ life, they do help bring a clearer understanding of some of the factors that helped shape Rollins’ music.

Although Sonny Rollins, The Cutting Edge is predominately a musical study, it doesn’t completely disregard important biographical information. One of the more controversial aspects of Rollins’ life, for example, is his early “retirement,” which lasted from 1959 to 1961. Palmer provides an objective look at this period. Part of the romanticism associated with Rollins’ departure comes from his now-legendary visits to New York City’s Williamsburg Bridge. He spent a great deal of time out on the bridge in the early morning hours practicing. Considering Rollins’ insecurity and somewhat mercurial nature, a number of of rumors circulated concerning these unusual practice sessions. Palmer, however, shows that the truth is much less spectacular than the rumors would have it.

Some of Palmer’s commentary comes across as somewhat editorial. He definitely lets readers know how he feels about Rollins’ music. Palmer definitely admires Rollins’ work, but isn’t afraid to say when he doesn’t like something. In a discussion of one of Rollins’ albums, for example, he states “For thirty-plus years I have tried in vain to enjoy What’s New ?” He continues, saying that “the music is decidedly joyless.”

Palmer shows the important place Rollins has in modern jazz. With Sonny Rollins, The Cutting Edge , he offers an accessible and well-researched book — definitely a worthwhile contribution to any jazz enthusiast’s library.

Visit Continuum Books on the web at www.continuumbooks.com .