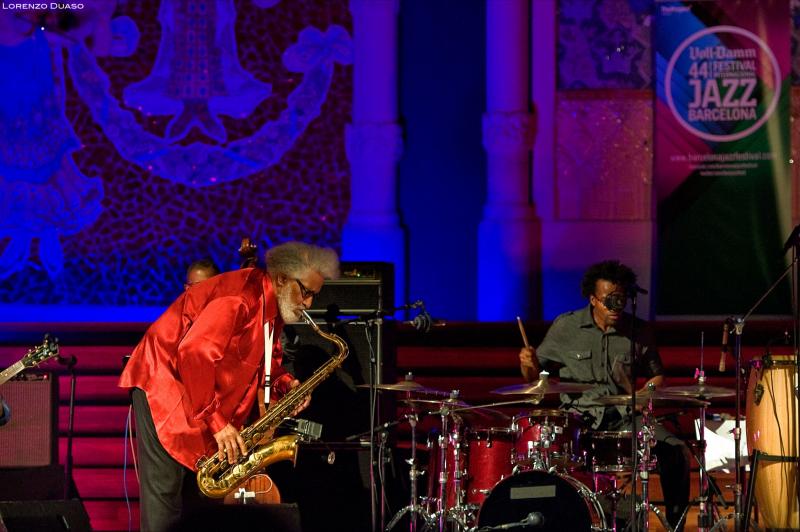 Traditionally marked in the calendar for being fascist dictator Franco's death anniversary, November 20—or 20-N, as referred to in Spain—has frequently been accompanied by some infamous demonstrations where the restrictive and attacking attitudes that would, by now, hopefully be a thing of the past still take the chance to make a shout in a public space. For an eager audience, this day in 2012 will be remembered as a live music encounter with a living legend, tenor saxophonist Sonny Rollins; a unique experience that, though a coincidence, still represented a freedom statement coming from jazz's expressive spirit and exercise, and particularly from Rollins' presence.

A Sonny Rollins performance is impregnated by the shaking feelings and sensations of a special occasion. All the process counts, from the initial thrill of finding out that his European tour was bringing him to Barcelona to the memory of the experience as time passes. A musician characterized by his personal integrity —easily illustrated in the coolness of his retirement periods, such as his blending of music and urban environment at the Williamsburg Bridge in the 1950s—and his personal, powerful and sensitive sound, Rollins proves to be a musician who should not only be admired for his trajectory but also for his present level.

The music set off with the exciting, cinematographic "Patanjali," which merged a grounded, deep soul structure and incisive melodies and riffs. A reflection of Rollins' own perception and appropriation of world music sounds, it somehow recalled the sound of reed multi- instrumentalist Yusef Lateef's Detroit: Latitude 42º 30' Longitude 83º (Atlantic, 1969), with its rich texture, Afro-Latin percussion and relatively little harmonic variation, revealing an insistence of feeling and strength without ever becoming overwhelming. Showing a sincere understanding, this initial statement featured driving dynamics and inspired solos, where Rollins' moaning and groaning tenor and trombonist Clifton Anderson's "worryin' the line" stood out.

Right from the start, Rollins made clear that age was no barrier, profoundly assimilating his instrument as a voice he uses to speak, sing, walk, run, and explore, always bearing in mind the importance of the overall result, which needed to be precise, compact yet expansive and communicative. As the audience cheered with emotion and respect, Rollins introduced the members of the band, including some friendly remarks for each of his colleagues. "J.J.," a ballad dedicated to trombonist J.J. Johnson calmed the mood, marking an ascendant starting point after the impressive preface.

The music continued with an outstanding performance of his classic "St. Thomas," where the rhythmic partnership between percussionist Sammy Figueroa and drummer Kobie Watkins gave the tune another dimension. By now a celebrated standard, "St. Thomas" delighted the audience, gratified by a unanimous recognition right from its start and the live enjoyment of its infectious, encouraging rhythm and a known-by-heart melody. Rollins then took some time to introduce "Serenade," an Italian folk song that he'd heard on the radio soap operas to which his mother used to listen in New York when he was a young boy. An easygoing tune with a romantic touch, it turned into a 20-minute performance with some time for drummer Kobie Watkins to improvise.

Rollin's particularly exquisite take on the standard "My One and Only Love," similar to the one recorded on Live at Montreal 1982 (Universal, 2009) was another highpoint. A moving and irresistible performance that made faces in the crowd happier and emotional, after a mellow immersion, Rollins gradually lifted it up as a celebratory tune through a sinuous and playful solo filled with quotes, flowing into a honkin,' cathartic, down-home blues ending.

The definitive "Don't Stop the Carnival," a joyful invitation to acknowledgement and action, built up into a memorable, robust and dancing performance that, like many of Rollins' compositions, was a fantastic musical companion for healing, overcoming, and celebrating. It was this soulful, catchy communication that ended the show, while the audience placed its last looks on their admired Rollins, an 82 year-old wrinkled and adorably familiar genius, who still has the music, the sound, the feeling, and the eccentric touch of mythic jazz musicians.