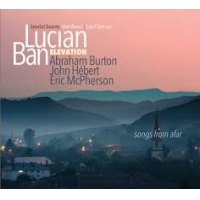 It is a truism that musical art, in whatever genre, entails much more than just the technical, either physical or theoretical. True art also has that ineffable something, which could be described as the soul of the performer touching the soul of the listener. The performer brings everything (including, of course, the extra-musical) he or she has experienced to that point and channels it through the music, hopefully creating one of those magical moments when time and space collapses and all present are one.

With Song From Afar, pianist Lucian Ban has created one of those very special albums that comes by only infrequently. The title alludes to Ban's cultural heritage of Romania, and specifically the Transylvanian region that is "far," both in physical distance and the time which telescopes back to the folk songs of that culture. Furthermore, Ban combines this ancient cultural past with many idioms of the modern language of jazz, creating something very personal which nevertheless communicates the human condition to anyone and everyone with a beating heart.

His working quartet, Elevation, adds saxophonist Abraham Burton, bassist John Hébert and drummer Eric McPherson, who individually are quite well known. However, this particular group transcends the individual and functions, quite obviously, as single creative unit. Some of the connection must be due to the relationship of Burton and McPherson, which goes back to their childhood in New York City's East Village neighborhood. Ban and Hébert co-led the octet which recorded Enesco Re-imagined in 2009. This album adds microtonal violist Mat Maneri, who was part of the Enesco group and who also was the other half of Ban's ECM debut album Transylvanian Concert.

This chemistry, this bond, this depth of communication, is immediately apparent from the opening notes of the first track, "Transylvanian Sorrow Song." Behind the opening lush piano chords, cymbals washes sound, leading to Gavril Tarmure extremely emotional rendering of the folk song, which says: "Long the night and I'm awake/ What may happen to poor sleep/ If I lay down sleep on sleep/ And one night sleep all of it". Burton joins in singing his comments through his horn, raising the emotional content to almost overwhelming proportions. Together, they are crying and exhulting as they stare reality straight on.

"Farewell" continues the exploration of this mood, which, it must be said, is not at all maudlin, but rather something approaching beautiful, aching melancholy, supported underneath by golden strands of optimism. Maneri whispers accompaniment to the piano, barely touching bow to strings, while managing to play within the key, but never quite on the notes. A chord change signals Burton's entrance with a beautiful sound and line, singing through his horn, floating above the piano and viola, as Hébert and McPherson play softly below. Hébert's magnificent solo is accompanied eerily by Maneri, and leads back to Burton's recap. Tearfully joyous.

The first section of Songs From Afar continues with "Travlin' With Ra," which continues the mood of mystery, but raises the intensity and adds not a little bit of humor through its twists and turns of harmony and rhythm. Burton is on fire as the band falls in and out of a rolling swing, dissonance and consonance, melodic lines and clusters. Quite a track, which will pin you to your seat. Following this is "Solo For A Brother With Perfect Timing (For AI)" which is dedicated to Abdullah Ibrahim. This seven minute paean has not one second of anything extraneous or repetitious as it continues the mood of the earlier tracks.

Just in time, the prevailing mood changes to more overt (but complex) happiness with the rollicking "Transylvanian Wedding Song I" (arranged by Hébert), as well as a shorter rendition arranged by Ban, both sung by Tarmure. In between is "Chakra, The Island," full of the mystery of nature at night, and "Spiritual," dedicated to the duets of Hank Jones and Charlie Haden, which is a bit of a refreshing whiff of the blues and spirituals.

"Southern Dawn" is an almost complete surprise, with its deep blues groove, sounding for all the world like Cannonball Adderley's "Mercy, Mercy, Mercy" but with Maneri adding his unique out-but-in touch as he accompanies Burton's deep playing. Very, very cool indeed.

Ban revisits his childhood village in his solo performance of "Teaca, A Song From Afar," where he manages to sing with the piano by holding down the keys in different registers as the piece proceeds.

Songs From Afar is a triumph of emotional and musical communication, and is not to be missed.