BY C. ANDREW HOVAN
April 23, 2014
Sign in to view read count
With the launch of their own label at the start of 2014, Smoke Jazz Club widened their circle by committing to tape performances by some of New York's finest musicians and dispersing this music via downloads and discs. A decidedly bare bones operation, the in-house production team has done a great job of capturing the ambiance of the room and everything from mastering to graphic design is dedicated to establishing an identity of quality and craftsmanship. 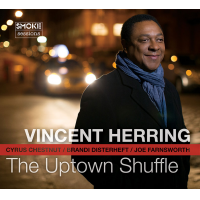 Following on the heels of their vinyl sampler and an introductory set by pianist Harold Mabern, comes The Uptown Shuffle by alto saxophonist Vincent Herring. This nine-track recital offers a smattering of Herring originals along with some well-chosen standards. Herring's choice of bandmates is nothing short of top shelf, with pianist Cyrus Chestnut and drummer Joe Farnsworth locking in with up and comer Brandi Disterheft on bass. A native of Vancouver, Disterheft has three albums of her own and has been actively making a name for herself here in the States the past few years.

The opening "Elation" is a Herring original of the modal variety with plenty of up tempo fire and panache to go around. Herring's tone has matured over the years and now has a stronger core tone, not unlike that of Kenny Garrett. For "Love Walked In," Herring recalls Lou Donaldson with his buttery tone and rhythmic swagger. Chestnut's original, "Uptown Shuffle" is feel good music of the best kind with a substantive solo from its composer. A master of brisk tempos, Farnsworth makes "Strike Up the Band" bristle with excitement. Check out the Phineas Newborn quote from Chestnut that ushers in a brief series of exchanges with Farnsworth to hear how well this rhythm section collates into a unified whole. A favorite Duke Pearson ditty, "Big Bertha," wraps up the proceedings on a joyous note, making this one of Herrings best presentations to date. 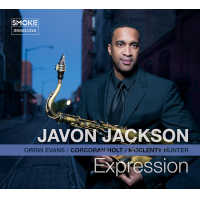 As one of the last saxophonists to be a part of Art Blakey's Messengers line up, it is apropos that Javon Jackson lead off his Smoke Sessions debut, Expression, with Wayne Shorter's "One By One." Like Herring, it is interesting to ponder Jackson's maturity over the years. The harder edge of his tone as heard with Elvin Jones back in the late '80s is now tempered with a more fluid and likable attack that is still nonetheless incendiary. He blows up a storm on this opening gambit, as does pianist Orrin Evans, who worries a phrase to make an ever so eloquent point. In fact, not taking anything away from Jackson, Evans sounds especially inspired throughout.

Like many of his contemporaries, Jackson decides to delve into some choice pop music of the '70s with his inclusion of Stevie Wonder's "Don't You Worry 'Bout a Thing." Evans kills the opener with his Tyner-inflected runs before Jackson rides the bossa wave stoked by drummer McClenty Hunter. The George Cables line, "Think on Me," is another great choice and shows Jackson at his most fluid and relaxed. Among his own originals are tributes to Richard Davis ("Richard's R.I.P.") and McCoy Tyner ("88 Strong"), maintaining a superb level of diversity in material and an excellent chance to hear Jackson in his element. 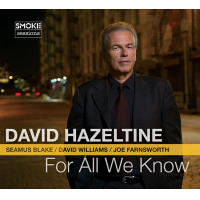 David Hazeltine
For All We Know
Smoke Sessions
2014

While many of today's jazz pianists are looking to make a name for themselves by morphing their jazz chops with shades of hip hop, the avant-garde, or world music, David Hazeltine avoids these pitfalls altogether. His individuality is achieved through commitment to his craft and an immediately recognizable composing and arranging style that has a clear and refreshing sense of purpose. Even while he pays tribute to Cedar Walton on For All We Know, Hazeltine's music speaks with a decisive quality that marks him as one of the true piano greats of his generation.

There's much to be said for the cohesiveness that comes from musicians sharing the stage together on a regular basis and in the case of Hazeltine, bassist David Williams, and drummer Joe Farnsworth, you'd be hard pressed to find a rhythm section that is more in tune with itself. Providing the 'yin' to the trio's 'yang' is tenor saxophonist Seamus Blake, making his first appearance here with Hazeltine and crew.

If you're familiar with Hazeltine's music, you know that he's become somewhat of an icon when it comes to rearranging standards. He has a knack of making everything he touches sound like his own work, breathing new life into standards like "My Ship," "Imagination," and "For All We Know." His own pieces are no less interesting, with him doubling melody lines with Blake on "Pooh" or reprising the funky excitement of "Eddie Harris," a tune first heard several years ago on a One For All set. All in all, this is another solid addition to Hazeltine's catalog and his first live recording as a leader.