By JEFF DAYTON-JOHNSON
April 24, 2012
Sign in to view read count 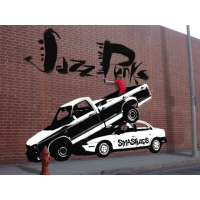 The conceit of the Los Angeleno Jazz Punks' debut is an appealing one: creative arrangements combining ("mashing up") really well-known jazz tunes ("Take The 'A' Train," "A Night In Tunisia," "Take Five") with really well known rock 'n' roll tunes ("Foxy Lady," "Should I Stay Or Should I Go?," "Misty Mountain Hop"). The jazz is mostly classic post-bop; the rock 'n' roll, mostly late-1960s/early-1970s FM fare. (Not all the sampled compositions are listed in the credits—half the fun is identifying the secret musical sources.)

There are two risks of such a project. First, the exercise could turn into a novelty record. The second is that in their enthusiasm for pastiche—"now we're playing the jazzy bit!" "now the rockin' bit!"—the musicians might fail to observe a basic jazz axiom: to speak credibly with their own voices.

On Smashups, the Jazz Punks dodge both bullets. These guys are good jazz players with distinct personal voices. In particular, guitarist Sal Polcino plays throughout in a fluent, blues-inflected style. Pianist Danny Kastner's aplomb is both lyrical and Thelonious Monk-like as he solos cogently over a fuzzed out guitar on "Foleo."

The variety of material helps prevent this from being a record with a gimmick. The original "Little Chickens" lays bare the band's sound in the absence of mashed-up material: hard-edged, bluesy, a little like NRBQ (surely, though, "Little Chickens" includes an uncredited nod to Monk's "Little Rootie Tootie"?). In the rock 'n' roll interludes, they recall saxophonist/composer John Zorn's Naked City (Elektra/Nonesuch, 1990), with its quick changes, inspired by hip-hop's cut-and-paste.

On "Bo-So," the Jazz Punks even mash up two jazz numbers: "Body and Soul," following the John Coltrane version from Coltrane's Sound (Atlantic, 1960), and Coltrane's own "Naima." They manage to combine two melancholy compositions into something that sounds sunny and bright.

But isn't jazz mashing up just, well, jazz? Oliver Nelson's monumental The Blues and the Abstract Truth (Impulse!, 1962), after all, included a series of compositions all of which were based on the chord changes to "I Got Rhythm," essentially mashing up Gershwin's harmony with new melodies. Much of jazz improvisation is founded on this very principle. Maybe so, but the abrupt changing of gears and the piling up of musical references on Smashups owes as much to mash-up DJs such as Girl Talk's All Day (Illegal Art, 2010)—with its 700-plus samples in under an hour—as it does to Oliver Nelson.

By appropriating these DJ practices into the jazz vocabulary, Jazz Punks move the focus away from the recording and the producer and back toward the performance and the musician. In this respect, Jazz Punks are distant cousins of trumpeter Arve Henriksen and his "live-sampling" coterie.

Indeed, what's innovative about Smashups is not the incorporation of rock 'n' roll tunes into jazz, but the adaptation of hip-hop practices into live performance. That, and the band's wit and warmth, are the sources of the record's success.