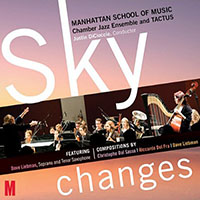 Jazz and classical music have long been bedfellows. As far back as the 1920s, clarinetist/soprano saxophonist Sidney Bechet was quoting Italian opera in solos, and in the 1950s/60s, notable composers/arrangers like Gil Evans and George Russell were, at least in part, driven to innovation through exposure/study of contemporary classical music, with Gunther Schuller even coining the phrase "Third Stream" to describe the two musics' meeting point. But, for the most part, all of this music bears some kind of connection to the jazz tradition. Sky Changes does, too, but it's a more tenuous link, one that comes, in more ways than one, through featured soloist, saxophonist Dave Liebman, who joined the Manhattan School of Music Chamber Jazz Ensemble and TACTUS for a reprise of this adventurous program, at the New York school's performance space, a year after its 2009 Paris premiere.

Liebman not only plays soprano and tenor throughout this challenging one-hour program, he also contributes one composition, the abstract and oblique "South Africa," a duet for soprano and viola that he wrote when Nelson Mandela was freed from prison in 1990. That the majority of the eight-minute piece is through-composed, with only a small space for improvisation near its conclusion, speaks to the overall tenor of the recording. But Liebman's contribution goes even further: the four other extended pieces on Sky Changes—two written by Italian bassist Riccardo Del Fra and two from French flautist Christophe dal Sasso—were inspired by (and, in some cases, quote directly from) his The Distance Runner (HatOLOGY, 2005), an overlooked gem of a solo saxophone recording.

Contrasting the typical jazz ensemble this is, instead, a 26-piece group with nary a rhythm section or (barring Liebman) saxophone to be found. Instead, clarinets, flutes, oboe, bassoon, French horns and tuba dominate, and the addition of five string players, a harpist and three percussionists renders its greater proximity to the classical environment complete, despite the inclusion a single trombone, trumpet and piano. And despite tinges of Gil Evans in del Fra's writing, and chord changes placed against Liebman's tenor solo in del Sasso's "Couleur," Sky Changes is clearly more, as Liebman describes it, "20th century writing with 'some' jazz influence."

Don't expect this music to swing, though there's plenty of pulse to be found, especially during the final minutes of "Couleur" and in the bolero-like pulse of the title track. But Liebman's visceral extemporal soloing over these complex compositional constructs could only come from someone who's dedicated his life to jazz and improvised music. And it speaks to Liebman's broader purview—a purview already clear early in his career, through his work with pianist Richie Beirach (whose own approach to jazz has been unmistakably linked to his classical interests)—that he is capable of performing the difficult written music here and, even more, improvising with absolute confidence, credibility and, at times, abandon.

A record that needs to be heard, to fully appreciate the far-reaching interests and talent of this 2011 NEA Jazz Master Fellowship recipient, Sky Changes may be a provocative listen for those with stronger jazz predilections, but it's an absolutely rewarding one.