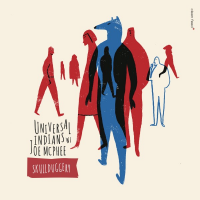 Throughout his career multi-instrumentalist Joe McPhee has always appeared remarkably open to collaborations with musicians from different scenes. Sometimes these blossom into more established groupings such as his regular hook ups with the Scandinavian power trio The Thing and more recently with the English improv outfit Decoy (witness Oto (Bo'Weavil, 2010) and Spontaneous Combustion (OtoRoku, 2014)). To this roster can be added Universal Indians: an Amsterdam-based collective comprising American saxophonist John Dikeman and the Norwegian rhythm pairing of bassist Jon Rune Strøm and drummer Tollef Østvang.

Dikeman is inspired, but not constrained, by the fire music legacy of Albert Ayler, and this chimes well with McPhee, himself an avowed follower in his early years, and part of an Ayler tribute band with trumpet Roy Campbell. McPhee practices his familiar blend of fire and honey on pocket trumpet and alto saxophone, matched by Dikeman's litany of overblown tenor and baritone shrieks and wails. However the young American also displays a melodic streak, perhaps moved by McPhee's existential promptings. Exciting interaction between the horns forms just one of the strong points of this meeting of minds, as they play off and around each other, while avoiding erecting a claustrophobic wall of sound.

McPhee stirs an emotional charge into this already heady brew by creating vocalic overtones by speaking or singing through his atmospheric pocket trumpet, as at the start of the freewheeling "Yeah, and?" and later his lyrical alto on the elegiac trio outing "Dewey's do." Strøm exhibits a string snapping physicality in his solo on the former, evoking the power and energy of English bassist John Edwards.

One of the set's other notable strengths stems from the rhythm team who have already developed a formidable understanding and empathy, honed not only here, but also in two Scandinavian quintets: All Included and Friends and Neighbors. That's apparent from their muscular squall on the title track, where Dikeman smolders with reflective intensity before unleashing a sequence of juddering clarion calls earlier on. After McPhee's meditations on his own "Knox" theme, subtly embellished by Dikeman, both reeds interweave gloriously over a laid back groove to finish. "Wanted" which features athletic bass and conversational drums, goes out in a series of cathartic riffs to complete a splendid album.

Yeah, and?; Dewey's do; Skullduggery; Wanted.