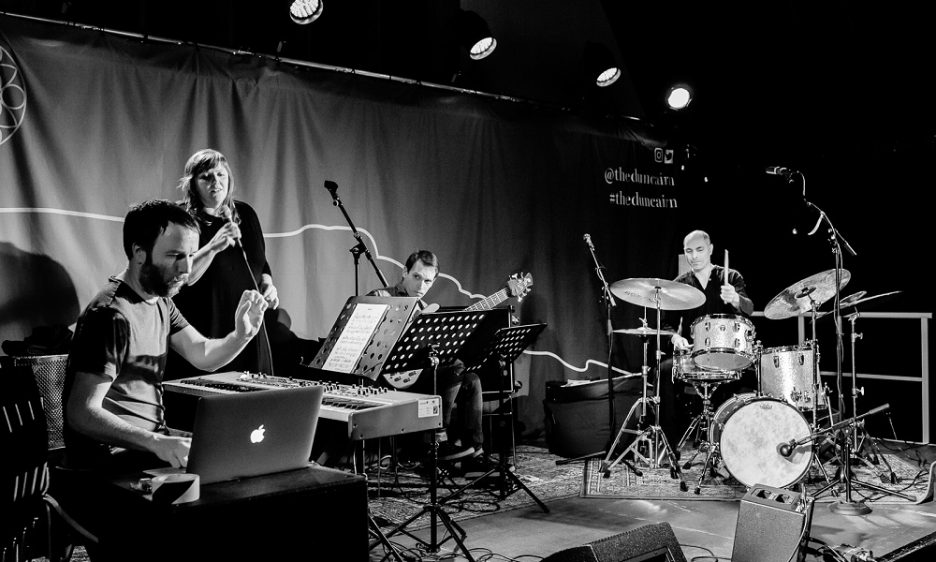 Coming so soon after Belfast's annual jazz festival, Brilliant Corners, the appearance of Sirkis/Bialas IQ at Duncairn Arts Centre was a real treat for jazz fans. Better still, the concert was free, sponsored as it was by the Institute for Conflict Research. Since 1996 the non-profit ICR, which is based in Belfast, has worked with community groups in a host of ways to promote good relations between N. Ireland's politically and socially divided communities. Combatting racism and sectarianism and encouraging social inclusion is what the ICR is all about and music—as it proves time and time again—is as good a tool as any to bring people harmoniously together.

The Sirkis/Bialas IQ came together in 2014. A compositional and improvisational vehicle for Asaf Sirkis and Sylwia Bialas, its debut, Come to Me (Stonebird Productions, 2015), was well received by international media. Its music is strongly rooted in jazz, but as this concert demonstrated, Sirkis and Bialas draw inspiration from a broad range of folkloric traditions. In the main, the concert showcased new material from the quartet's as yet to be released album, Our New Earth.

The bar was set high from the opener, "Message from the Bluebird"; bookended by Bialas' soaring wordless vocals, this elegiac composition was an early introduction to the quartet's striking melodic and rhythmic chemistry, with pianist Frank Harrison's circling motif and Kevin Glasgow's bass pulse underpinning Sirkis' animated kit work. One of the great modern drummers, Sirkis' fiery unaccompanied intro to "Reminiscence" bristled with energy and percussive intensity, setting the tone for a brisk quartet workout, with Bialas—like Norma Winstone and Lauren Kinsella—employing her voice fearlessly as another instrument.

A brief poem from Bialas was a fitting intro to a beautifully lyrical slower tune built around her Polish-sung lyrics and with caressing contributions from Glasgow and Harrison. Harrison's association with Sirkis goes back almost two decades, notably in Gilad Atzmon's Orient House Ensemble, and the musical spark between them was pronounced. Whether on acoustic or electric keys—as on "Spooky Action at a Distance"—Harrison's comping was uplifting and his soloing, particularly on the emotive, church-organ-influenced "Letter to A," was thrilling.

The church organ was a formative influence on Sirkis as a child growing up in Israel and it's a sound he has embraced—via Olivier Messiaen's organ works—to original and foreboding effect with The Inner Noise on albums such as We Are Falling (Konnex Records, 2006). In the context of Sirkis/Bialas IQ, however, Harrison's organ tone is more subtly bluesy and hymnal than the doomy, gothic-sounding organ sound of Steve Lodder in The Inner Noise.

Poetry and balladry fused in Bialas' lovely "Chiaroscuro." Here, the singers' aching, blues-tinged vocals were lent sympathetic support by Sirkis on brushes, while Harrison's beautifully weighted acoustic solo provided a set highlight. The quartet upped the tempo and intensity on another noteworthy Bialas composition "Pegasus," with the singer giving full rein to her powerful voice; a thunderous rhythmic barrage, driven by Sirkis, made for a dramatic finale.

The climax of the concert came with twenty-minute epic "The Earth Suite," which began with tanpura drone—courtesy of Sirkis' mobile phone—and soaring vocal. Following an extended collective passage, punctuated by fine solos from Glasgow and Harrison, the Indian classical influence resurfaced as Sirkis gave an impressive exhibition of konnakol—the Carnatic vocal percussion technique that he's been studying for the past decade. Singer and drummer improvised together briefly before the composition concluded with church organ solemnity.

On the evidence of this concert the upcoming second album from Sirkis/Bialas IQ should help further establish the quartet as one of the most interesting of contemporary jazz ensembles. With music this uplifting, so sensitively and passionately rendered, it's hard not to be seduced.