Home » Jazz Articles » Set The Night On Fire: Living, Dying and Playing Guitar With The D...

Set The Night On Fire: Living, Dying and Playing Guitar With The Doors

By Doug Collette
October 17, 2021
Sign in to view read count 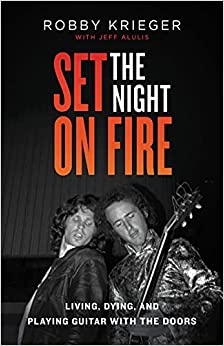 Reading the memoirs of The Doors' Robby Krieger is like encountering and catching up with an old acquaintance after a protracted period of separation. The stories flow quickly and easily, albeit not always in chronological order (as the author readily admits), and the bemused tone of the narrative only heightens the brevity of many chapters.

But that quick succession of segments enhances the pronounced and cumulative air of clarity ultimately arising from the author's reflections. The last member of the iconic band to be published, Krieger nevertheless distinguishes himself from his bandmates with Set The Night On Fire: bereft of much melodrama, his insight is most unusual in illuminating the individual and group dynamic, especially between himself and late vocalist/composer Jim Morrison, but also keyboardist/vocalist Ray Manzarek and drummer John Densmore.

The seemingly random nature of Krieger's recollections are not wholly haphazard. True, his memories of childhood and college don't always proceed in the order in which they occurred, but those involving his time as a member of the Doors always do. And as he moves forward in his narrative from the residency at the London Fog club in Los Angeles to the Whiskey A Go Go further down Sunset Strip, then on to recording the group's first album of the group and beyond, he creates a tangible suspense about what he will say next (kudos to co-author Jeff Alulis or whoever edited with such savvy, not to mention those who supervised the insertion of so many telling photographs).

As a result, when the time comes to relate what happened in Miami that fateful March night in 1969, Robby Krieger's less-than-dramatic account becomes a distinctly lucid take on its still controversial circumstances. In that context, the writer might be accused of sometimes sounding ingenuous too often for his own good. His own lack of comprehension is confounding, for instance, as he recounts the instances of violence and crowd control (or lack thereof) that increasingly come to dominate performances of the Doors; not that he avoids acknowledging both the short and long-term implications of the aforementioned pivotal moment as well as Morrison's 1967 arrest onstage in New Haven, Connecticut or the riot that occurred at the Singer Bowl the next year, but he sounds almost defensive in his tacit stance of wonder and confusion about how a rock and roll band could ignite such chaos.

Such understatement is in marked contrast to that of his bandmates who published their memoirs. Grounded in a longstanding working relationship as a co-songwriter with Morrison, Robby Krieger's matter-of-fact take on the frontman's charm and generosity (in business and personal dealings) is rare insight indeed, especially as it belies the often reckless flamboyance for which the latter is most widely known. But then the author's own first hand experience with aberrant behavior within his own family, particularly that of his mother and his brother, may be the source of the zen-like tranquility by which he accepts the self-styled poet cum bluesman on his own terms.

Such is the image that crystallizes as Set The Night On Fire reaches its finish. Yet it's nevertheless more than a little surprising that quiet tenor of Krieger's also pervades his account of heroin usage and addiction with his long-time spouse Lynn. Not to mention the mounting rancor between the surviving Doors that ultimately found them in court pitted against each other: Krieger pulls no punches in telling those stories, but there's a noticeable lack of bitterness even as he leverages accusations of self-serving actions and words at both Manzarek and Densmore.

In fact, his repeated professions of friendship toward them, despite all the strife, begs the question of his search for spiritual enlightenment as he describes it. Throughout the book, this guitarist/songwriter so steadfastly maintains his emotional and psychic equilibrium, it's reasonable to suggest he's been in command of that psycho-spiritual state for some time. Thus, even as the low-key close to Living, Dying and Playing Guitar with The Doors belies the drama of its main and subtitle, it's fully appropriate.

This flamenco-trained blues aficionado's presented a good-natured and down-to-earth portrait of himself virtually uninterrupted throughout the four-hundred thirty-two pages. Accordingly, to leave that final impression with his readers upon conclusion of his memoir is simply the natural (and perhaps inevitable) extension of his unpretentious humanity.