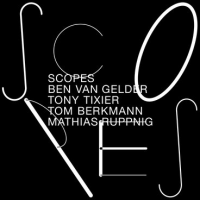 The quartet is completed by French pianist Tony Tixier and Dutch alto saxophonist Ben Van Gelder. Tixier, currently living in New York, is rapidly gaining an international reputation. In 2009, he self-released Parallel Worlds and in 2012 opened for Herbie Hancock at the Jazz En Tête Festival in Clermont-Ferrand, France. Tixier was also recently featured on Seamus Blake's Guardians Of The Heart Machine (Whirlwind, 2019). Van Gelder moved to New York when he was seventeen, studying with the likes of Guillermo Klein, Jason Moran and Lee Konitz.

The album opener "Echo Of Their Own Prejudices" is arguably its most strident track by virtue of a midway departure from its initially piano-based approach to a spotlight for Tixier's engagingly lithe synthesizer. "Chamberlain" is a lyrical outing, with Tixier's sensitive piano leading the piece followed by Van Gelder delicately tracing the melody. "Aquaponies" benefits from an enchantingly memorable alto hook that mesmerically suffuses the whole number.

Starting with an insistent yet subtle bass and drum rhythm, the serpentine "Balance" is enhanced by Tixier's sprightly synth runs and Van Gelder's exuberant alto. The breezy "Alter Ego," underpinned by Berkmann's walking bass line, is an unequivocal foot-tapper. Even on the more pastoral numbers such as "Lakeview," Ruppnig's crisp drumming makes its presence keenly yet sympathetically felt, projecting a mood of electrifying animation throughout.

This is Scopes' eponymous debut album and its release coincides with a European tour. Judging by this excellent first album, the band could well have the makings of the epithet "international super group."