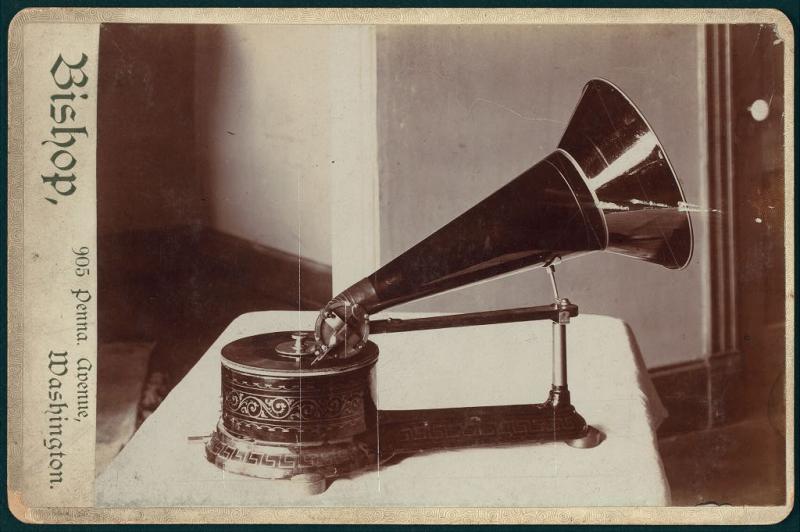 BY FRADLEY GARNER
April 6, 2013
Sign in to view read count
Library of Congress Acts to Save Old Recordings

More than half of the oldest sound recordings, including some masters by George Gershwin, Judy Garland and Frank Sinatra, have been lost over the years, according to the Library of Congress. Patrick Loughney, chief of the library's audiovisual conservation division, believes the nation has developed a "cultural amnesia," forgetting how much of its history was captured in recorded sound.

The library has revealed an ambitious plan to help libraries and archives across the country reverse the trend. The nonprofit National Recording Preservation Foundation (NRPF) will award grants to smaller archives that need funding for audio preservation.

This year the NRPF is starting to raise money for the purpose. "America's recorded sound history is incredibly rich," Loughney said to the Associated Press.

"There's just a lot of material that's sitting in archives that is slowly deteriorating," he warned, "and unless an effective national approach is taken to saving these materials, it's going to be a tremendous loss."

So blazoned the headline in the New York Daily News. Alvin Reed, former tenant and owner-manager since 1988 of the 70 year-old Lenox Lounge, and his movers, allegedly ripped off the bar's façade, neon sign and much more, last New Year's Eve.

They took "everything from the premises"—from fixtures, banquettes, mirrors, bathroom doors, to Zebra Room mementos — and deposited them in Reed's new club two blocks away. Reed's lawyer, Tyretta Foster, said the items he took "were part of a bill of sale that was transmitted when he purchased the business and the furnishings." The $50 million suit demands their return.

One of New York's oldest venues, at 288 Lenox Ave., the bar hosted a "who's who" of major artists who performed there over the decades, including Billie Holiday, Teddy Wilson, Miles Davis and John Coltrane.

The lounge served as the hangout of Detective John Shaft in the 2000 remake of the movie, Shaft. Both the façade and interior were backdrops in American Gangster. In one scene, Denzel Washington's character, Frank Lucas, meets with Nicky Barnes (Cuba Gooding Jr.) in the club's famous Zebra Room.

Meanwhile, Reed is getting set to reopen the Lenox Lounge in new quarters at 333 Lenox Ave. this summer. He also took the outdoor neon marquee sign with him. Chain restaurateur Richard Notar aims to beat Reed open this spring with a new jazz spot at the old site. Its name remained to be announced.

Then there's the story about the Los Angeles police, in the manhunt for ex-officer Christopher Jordan Dorner, shooting up the blue 1989 Ford Aerostar van carrying three members of "The Brubeck Ambassadors Jazz Band" and their manager. They were headed for a Dave Brubeck memorial concert in the area.

The story, published February 13, 2013 in The Daily Currant, rang true. It was picked up, among other media, by AllAboutJazz.com, the largest jazz trade organ, and at the Jazz Friends blog. Several contributors jumped to deny it. But that didn't convince everyone. Wrote one non-believing Jazz Friend:

"It is important to be crystal clear on this. The shooting incident did not happen. It's a satire, a hoax. Trace the story back to the original... The Daily Current [sic] is an American satirical news blog. . . . A number of its . . . stories have been taken for true news reports by press and . . . the public.

"Based on 95% of the Comments at various sites . . . 95% of all readers (including me) believed it!! Worse yet, I passed it on to fellow musicians and am now contacting every single one to recant. This is a perfect example of . . . 'If it's in print, it must be true.' By Russ Panzarella."

What do you call a tune based on a chord structure borrowed from another tune?

At least 40 jazz songs borrow the chord changes from George and Ira Gershwin's "I Got Rhythm." ("Chasin' the Bird," "Jumpin' at the Woodside," "Lester Leaps In," "Rhythm-A-Ning" are four.)

The term for this is contrafact. "As a compositional device," reports Wikipedia, "it was of particular importance in the 1940s development of bop, since it allowed jazz musicians to create new pieces for performance and recording on which they could immediately improvise, without having to seek permission or pay publisher fees for copyrighted materials (while melodies can be copyrighted, the underlying harmonic structure cannot be)."

Contrafacts have been used as early as the 16th century in classical music.

A new "Swing Street"? Could be, though it's not 52nd Street in New York, where the clubs thrived in the 1930s-1950s. This one is down in N'Orleans. No, not Bourbon Street, but nearby Frenchmen Street — a two-block mecca of a dozen-plus venues made famous in the HBO series Treme. 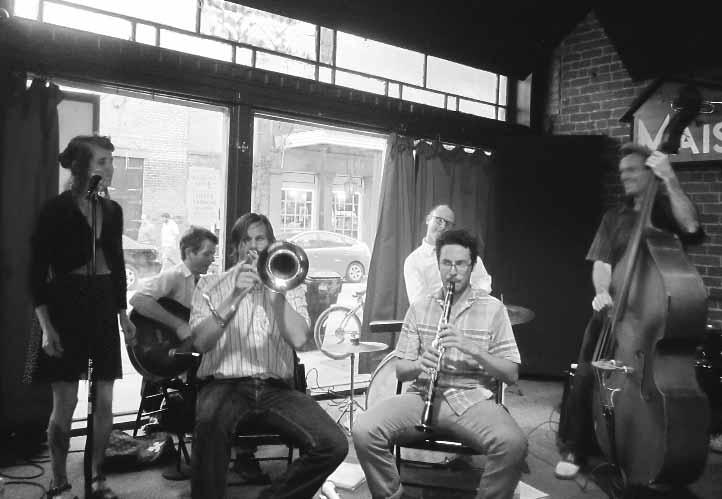 "Frenchmen is as different from dear departed 52nd as New Orleans is from New York, but it's a similar stretch of musical plenty," veteran visitor Dan Morgenstern tells me. Seven nights a week, you can wallow in Delta sounds.

"Jazz veterans such as bassist James Singleton, trumpeter Kermit Ruffins, pianist Tom McDermott and Swedish clarinetist Orange Kellin are Frenchmen mainstays," writes the state webzine offbeat.com. "And when it comes to a genuine icon, venerable trumpeter and vocalist Lionel Ferbos, now 101 years old, usually leads the band on the final Sunday of the "Nickel-a-Dance" series at the club Maison."

But a younger set of musicians is attracting new audiences. Admission is usually free, drinks cheap. "It's wise to stick to the good local beer rather than the hard stuff, if you're planning a full evening," Dan advises, "and some places even offer a bite to eat. And this being NOLA, there's dancing when space permits." You may be asked to "make a contribution to Philip" (as in "Fill up the tip jar"). In some spots, that's the only money the players make.

Tragedies in musicians' lives can affect the way listeners react to their music, submits jazz historian and active musician Mark Gridley, whose study at four colleges was published in Psychology Journal, 2012.

In one semester of a jazz and popular music course, 94 students listened to Charlie Parker's solo on the 1946 Dial recording of "Lover Man." Half the group knew nothing about Bird's life. The other half had read Brian Harker's account of the misery in that life and the unfortunate circumstances of the "Lover Man" recording session.

That second half rated the saxophone solo on the recording as significantly sadder than the uninformed students rated it. The author offers a PDF file of the full article to readers who email him at [email protected].

This year Dr. Gridley published the 7th edition of his Concise Guide to Jazz, with three CDs of historic recordings. The book tells how jazz originated and is performed, what to listen for, and covers major style eras. Publisher Pearson Education and Amazon sell the 320-page paperback online. It's available digitally from Pearson's site, MySearchLab and in other formats from CourseSmart and Amazon.

The night after Catherine Russell's CD, Strictly Romancin', was named Vocal Album of the Year by l'Academie du Jazz in Paris, the singer took the stage January 15 at Town Hall in New York to perform at the 11th annual Nightlife Awards. There she was feted as Outstanding Jazz Performer of 2012. In a review, The New York Times called Russell "a great, subtle jazz-soul singer [who] squeezed the last drop of tangy juice out of 'Romance in the Dark.'" And the roses kept flying. "Cat" Russell, who thrilled New Years Eve patrons at Shanghai Jazz in Madison, NJ, was tapped for a Bistro Award for Outstanding Recording at the 28th annual Bistro Awards Gala, March 4, 2013, at Gotham Comedy Club in New York.

"Dustbowl Revival" is the name of the band of seven men in beat-up trousers mostly held up by suspenders, wide ties and vests, some wearing newsboy caps, and two women singers in flapper-style dresses.

Average age maybe 27, they strum, saw and blow with a happy vengeance while beaming couples swing around the dance floor. This at a club in outlying Silver Lake that, according to The Los Angeles Times, "usually houses mopey indie acts and beat-heavy EDM" (electronic dance music).

No musical quirk, it has counterparts across L.A. The "music-theater collective Vaud and the Villains (complete in Depression-era attire)" generate "a storm of energy and freewheeling musicality at the Fais Do-Do club midtown.

Zach Lupetin, leader of the four-year-old Dustbowl Revival, said "There's a lot of this throwback music, which is maybe because of the recession or depression fever." In the last three years, he added, "10 bars have opened in L.A. specifically designed for that '30s feel; they want old-school bluegrass and jazz."

Fradley Garner is an American freelance writer, editor and translator based in Denmark.