New Orleans is a city with a rich musical heritage, and Tom McDermott is a pianist who has mastered many of its styles.

Born in St. Louis in 1957, McDermott began piano lessons at age six. After eight years of lessons, he got caught up in the Scott Joplin revival and began playing and composing rags and early jazz pieces. This eventually led, in 1981, to an album of original ragtime music on the Stomp Off label, New Rags.

McDermott received a scholarship to St. Louis University and graduated in December 1978 with a B.A. in Art. Shortly after that he began his career as a free-lance journalist, writing mainly about music for a number of St. Louis newspapers. He was the jazz and rock critic for the morning paper, the Globe-Democrat, from 1980 through 1983. In 1982 he earned his master of music degree from Washington University in St. Louis.

In 1984, McDermott moved to New Orleans, lured there by a job at the World's Fair as well as a passionate interest in the music of Crescent City pianists like James Booker, Professor Longhair and Dr. John. He quickly found steady work, first as a solo pianist and later with jazz bands. From 1990 through 1995 he played with the Dukes of Dixieland, a period which many observers feel was the group's peak since the death in the '70s of the founding Assunto brothers. During this time the band recorded three albums (including one with jazz legend Danny Barker), toured Germany and South America, and played Carnegie Hall.

In April 2005, McDermott released a Brazilian-music masterpiece, Choro do Norte, his most ambitious work to date, the album was recorded in Rio de Janeiro in August 2004 and New Orleans in 2004-05. In Brazil, McDermott recorded with three members of one of Rio's hottest choro groups, Tira Poeira. Returning to New Orleans he added two fantastic players: clarinetist Evan Christopher and trombonist Rick Trolsen.

McDermott left the Dukes of Dixieland in May 1995 to join the American Queen riverboat for four months of its opening season. During this time he composed and recorded All the Keys and Then Some, a 24-piece suite for the piano which was released in the Spring of 1996. He also co-founded the New Orleans Nightcrawlers, a sensational new brass band.

In 1998, McDermott followed the success of All the Keys with a recording that truly explored the roots of New Orleans and Louisiana's music. Louisianthology incorporated the talents of many of New Orleans' finest musicians, including the Nightcrawlers. The recording showcases McDermott's imaginative composition and arranging skills and has been received with critical acclaim.

In 2000, McDermott returned to the solo piano format, but kept his focus on the significant influences on the New Orleans "piano sound." The Crave has received rave reviews and firmly places McDermott at the forefront of a long legacy of New Orleans piano giants.

McDermott's 2002 release, Danza, featuring clarinet virtuoso Evan Christopher, continues his explorations into early music and the Latin influences that worked their way into the culture of New Orleans. Read more about Danza in the press release.

He continues to write (mostly for New Orleans' The Times-Picayune) and to travel (he's visited Asia, Australia, South America, and has made eleven trips to Europe) whenever possible. Show less 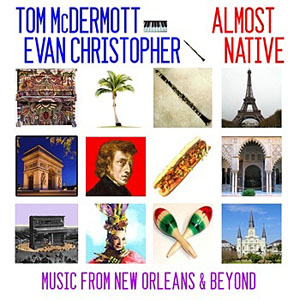 All About Jazz musician pages are maintained by musicians, publicists and trusted members like you. Interested? Tell us why you would like to improve the Bob Crosby musician page.