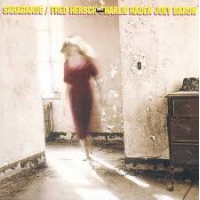 Sarabande is a re-mastered reissue of a recording done in 1986, and should be welcomed with open arms. Those who know pianist Fred Hersch get to hear the early work of an now-acknowledged master; those who do not can hear timeless playing from thirty years ago.

In the notes, Hersch has dedicated this reissue to bassist Charlie Haden with a back story which can be summarized as follows: in 1984, Hersch began playing with Haden, and in 1986 made his debut recording, Horizons on the Concord label with bassist Marc Johnson and drummer Joey Baron. In 1986, he owned a recording studio in Soho, and was looking to record his second project as a leader. He knew Haden was in town, had written "Child's Song" (see below), dedicated to Haden, scheduled two days in the studio, got Baron, and the rest is history.

As an aside, this same 1986 trio, in 2005, recorded with Toots Thielemans the delightful Do Not Leave Me, which shares "Blue In Green," fantastically done here. (again, see below).

This early Hersch is most definitely a romantic who uses a deep intellect, along with scintillating chops, to create multi-faceted music which is deep, but easily accessible. Comparisons are always dangerous, as are rankings, but Hersch fits easily between someone like Marc Copland (see Azimuth, which includes Baron) and a player like Bobo Stenson (see his discography).

The set includes a number of standards, both old and new, an Ornette Coleman (also a Stenson favorite) tune, along with three Hersch originals (including the title tune), arranged in two parts, with originals in the second part. The nine tracks are mostly in the five to seven minute range, so there is plenty of time to stretch out.

Beginning with Rodgers and Hammerstein's "I Have Dreamed" (from The King And I -1951), Hersch offers a straightforward trio presentation (albeit with many, many fine ideas and harmonies) of this pretty tune; his piano is doing the talking, while Haden and Baron provide support.

Things change drastically on "Enfant," the Coleman tune, which Hersch wanted to include due the masterly way Haden can turn on a dime. We now have three equal voices that work together to create the music which twists and turns, grows and ebbs as it moves forward. The opening, sparse, ruminating section gets denser and denser until everyone locks in and the music takes off. This cools down about half-way through, leading to a terrific Haden bass solo, after which Hersch re- enters and seems to allude to, with just enough notes and rhythm, "What Is This Thing Called Love?." Excellent track.

The mood swings back to the romantic (and longest track) with Jimmy Rowles' gorgeous tune, "The Peacocks." While the tune itself is justly held up as the epitome of mysterious beauty, this rendition can only be called majestic, including the deceptively simple, but profound Haden solo, and makes an interesting comparison to the Marc Mommaas/Nicolaj Hess version on Ballads & Standards.

The first half of the record ends with a blistering version of Cole Porter's "What Is This Thing Called Love?," one of the most recorded tunes in jazz, due to its unique and ambiguous construction as detailed in Jean-Michel Pilc's recording, What Is Thing Called?. Ideas just pour non-stop out Hersch's fingers, while his improvisations move away from the tune proper, without however, losing touch. Masterful.

The second half starts with the title tune, which is the name of a dance movement in slow 3/4 time, as used many times by Bach in his keyboard (and lute) suites. Lush and romantic, Hersch sings with the piano keys fading out at the end. "This Heart Of Mine" by Arthur Freed and Harry Warren (1946, Zigfield Follies) follows, lightly swinging and played in a manner very much like the opening tune.

"Child's Song" changes the mood completely with its allusions to open land and big sky through the melody, rhythm and harmony. Haden takes advantage of this tune dedicated to him, letting his bass fly. Simplicity and directness (as in the way the harmony moves) make a deep impression.

The last ten minutes are given over to the diaphanous "Blue In Green" by Miles Davis/Bill Evans. Hersch uses lots of pedal to create a waves of sound that roll in and pull back out to create tension and release. "Cadence" is just plain fun with its central theme of the ii-V-I progression given a real workout.

Sarabande shows that in 1986, Hersch already knew what he was about, and picked the perfect trio to make it happen.

I Have Dreamed; Enfant; The Peacocks; What Is This Thing Called Love?; Sarabande; This Heart Of Mine; Child's Song; Blue In Green; Cadences.