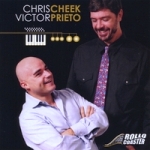 An odd couple of sorts, this union between accordion and saxophone is at once curious but proves a match made in heaven with Chris Cheek and Victor Prieto's collaborative release Rollo-Coaster. With great aplomb, they cover a wide scope of music from Tango to improvisational stints and other influences.

Prieto, originally from Galicia, Spain, is fast becoming one of the premier accordionists in jazz, providing mastery and flair to recordings with singers Beat Kaestli and Tessa Souter, and classical icon cellist Yo Yo Ma. His debut Persistencia (Foxhaven, 2006) unveiled his refined abilities and ground breaking techniques on the extremely difficult instrument.

Cheek is a resounding saxophone leader who has gained notoriety locally playing with the likes of Charlie Haden and Brian Blade and abroad with Guillermo Klein's Los Guachos and Orchestra Jazz de Matosinhos.

A bond was formed 2006 when the two worked together on the Emilio Solla's New York Jazz Tango Project, which led to the concert recording and DVD Live At Penelope St. (Cheekus, 2008). From the accordion's first breath in "Bebe," its bellows ignited into a flurry of notes that dance with the soprano's airy voice, the two musicians engage in simpatico dialogs.

These conversations have contour and varied personalities. Prieto's percussive taps set up a tune with jovial, Django Reinhardt-esque Gypsy swing in "Six Note Samba." Cheek's horn exudes a melancholic beauty in "Shelter" that is perfectly matched by Prieto's somber accompaniment. But the mood quickly evaporates with the virtuoso maneuvers in "Chatting with Chris" as the artists push each to new feverish heights and quiet lows.

The duo's ability to interpret and invent is witnessed in their unique read of Wayne Shorter's "Rio" and also in their own improvisations in the three "Improv" tracks. Whether breathing life into written material or creating something out of thin air, their magic is persuasive.

Visit Chris Cheek and Victor Prieto on the web.