Roberto Magris’ Journey to the Heart of Hard Bop

By C. MICHAEL BAILEY
July 29, 2012
Sign in to view read count
Italian pianist and composer Roberto Magris has carved his name in jazz stone over the past decade with recordings like Check-In (Black Saint, 2005), Il Bello Del Jazz (Black Saint, 2006) and Current Views (Black Saint, 2010) with his ensemble Europlane, and Kansas City Bound (Pami, 2009) and Mating Call (JMood, 2010) (which foreshadows the hard bop of pianist Tadd Dameron) with his various other groups. He is a sturdy mainstream pianist with impressive chops, both instrumentally and compositionally.

Magris was coaxed into a couple of fine hard bop recording sessions that promise further volumes to be released. That is good news. It is a good thing he has sturdy mainstream chops, he needed them as the repertoire is demanding and suffers lesser players poorly. 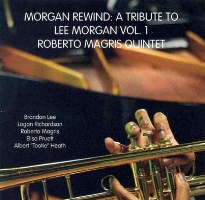 In his book Hard Bop: Jazz and Black Music 1955-1965 (Oxford University Press, 1993), author David Rosenthal, in the chapter "The Power of Badness," defines the hipster slang word "bad" as trumpeter Lee Morgan. More specifically, Lee Morgan as he solos on "Caribbean Fire Dance" on saxophonist Joe Henderson's 1966 Mode for Joe (Blue Note). The same could be said for Morgan's contribution to the hard bop anthem "Moanin'" as heard on Art Blakey and the Jazz Messengers' 1958 Blue Note recording of the same title. Morgan possessed a certain malice or danger and at the same time was capable of composing lasting melodies like "Ceora" and "Search for a New Land."

Magris plays piano foil to these myriad faces of Morgan, with trumpeter Brandon Lee in the role of the principle. Alto saxophonist Logan Richardson provides that mandatory reed so important to this classic hard bop quintet. Richardson waxes abstract in his solo on Morgan's minor key blues "Party Time," from The Procrastinator (Blue Note, 1967), a sound much more in keeping with the angularity of Search for a New Land (Blue Note, 1964). Magris solos more forthrightly but no less boldly. Brandon Lee does Morgan's memory proud, blowing open bell, full bore. This was always the nature of Morgan's music. It is visceral and organic, rising from the fertile humus of bebop morphing into hard bop and soul jazz. Magris captures this transition in his ease of swing even when he swings hard.

Magris' original "Lee-Too" (one of two in the disc) pushes the Morgan- fueled hard bop idiom to the edge of completeness, rocking with a call and response cadence that is relentless. The other original, "Lee Morganized," showcases Magris' grasp on Morgan's legacy, featuring a complex and propulsive head and changes over which solos are spun. That Margris covers Morgan chestnuts like "Desert Moonlight," "Hocus Pocus" and "Mr. Kenyatta" is the rich gravy of a lifetime of music making. Magris give Morgan a proper dressing up, driving home the point that it was not all Dizzy Gillespie and Miles Davis. 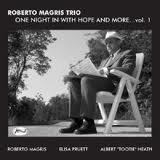 One Night in With Hope and More...Vol. 1

Stylistically, Morgan Rewind: A Tribute to Lee Morgan Vol. 1 was a great success, executed with panache and swing. Magris' next project followed the same rich vein of hard bop, this time concentrating on some of the lesser-known masters of the genre, specifically pianists Elmo Hope, Tadd Dameron, Barry Harris, Andrew Hill and Mal Waldron.

The first delight of One Night in With Hope and More...Vol. 1 is one not even aural, it is visual, the cover. It finds Magris sitting in a deck chair, in suit and tie, a smart, straw porkpie on his head, looking at the score to Elmo Hope's "Happy Hour." Obviously a rave-up of the LP cover of Hope's Elmo Hope Quintet (Blue Note, 1954). The interior photo of Magris' disc is more faithful to the Hope original, a cat replacing Hope's dog. This cover sets the tone for the theme of Magris' recording, that is a focus on some of the lesser known heroes of hard bop, that brand of jazz on the East Coast that evolved in reaction to "cool school" and hyper-arranged West Coast jazz.

Hope (1923 -1967) was an undervalued devotee to bebop and hard bop pianism. He lived and performed on both coasts, recording a scant six LPs as a leader, though he recorded widely as a sideman. His style is often compared to that of Herbie Nichols or Sonny Clark and typically relied less on the blues than other, more carefully composed harmonic structures. Magris open his disc with Hope's "Happy Hour," from The Elmo Hope Trio (Blue Note, 1953). Magris captures Hope's infectious swing and clever harmonization. The pianist then addresses Tadd Dameron's beautiful bop ballad, "If You Could See Me Now." Dameron was responsible for many of the hard bop jazz standards, including "Mating Call," "Good Bait" and "Our Delight." 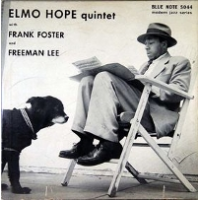 Mal Waldron's "Fire Waltz" and "Andrew Hill's "East 9th Street" showcase two other mammoth but lesser known talents. As is all hard bop, these are sturdy compositions that resist bravely interpretation outside the idiom. Magris, joined by bassist Elisa Pruett and drummer Albert "Tootie" Heath, faithfully perform these tunes, updating them in such a way that they lose none of the punch of the originals. This disc is not a rote homage to hard bop so much as it is an attentive appreciation rendered by three like-minded musicians recalling a heyday long gone.

One Night in With Hope and More...Vol. 1

Tracks: Happy Hour; If You Could See Me Now; Theme from "The Pawn Broker"; I Didn't Know About You; Elmo's Delight; Half May; East 9th Street; My Heart Stood Still; Fire Waltz; Audio Notebook.