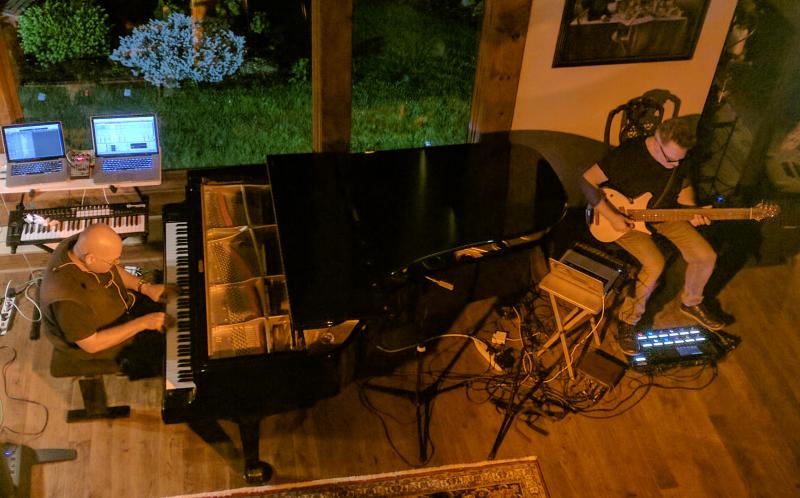 American ambient keyboardist Robert Rich and German touch guitarist Markus Reuter have known each other for over a decade, and produced two albums together. But they have never toured together until now, a short tour they are calling Flood Expeditions after their most recent record, 2017's Lift a Feather to the Flood. So far the real world weather has been laying the irony on pretty thick: there were tornadoes during the previous night's performance, and this one was interrupted by a flood warning!

The first set opened with a slow, ominous sound: sparse piano chords and sustained guitar, primarily in the low register (Reuter was playing an 8-string touch guitar). After awhile he began looping the guitar, then reconstructing the loops. Later he mentioned including some sampled piano in the loops as well, but always modified in ways that made it unrecognizable. Rich was basically playing an acoustic grand piano, but amplified and with a bit of reverb to add some shimmer and sustain to augment the natural instrument. The second piece began with echoed guitar—Reuter was plucking most of the notes, as he did for much of the night. While still far from a standard guitar sound, it was closer than his usual approach. The duet was quite well balanced between the two instruments, with Rich often taking the lead despite the fact that his sound pallette was limited to the piano. The third and final piece in the first set finally did feature a fuzz guitar solo (more like the Reuter we know from projects like the Stick Men).

Rich began the second set with an announcement that the pair was improvising all of the music (which explained the lack of song titles). The fact that this was not obvious from the first set is an indication of how well these two players communicate. Each of the improvisations was between 10 and 15 minutes long, as they had been in the first set. The Reuter fan in me is happy to report that there was a big fuzz guitar solo during the first piece. The second one had a dramatic texture with slow glissandi to end, with the piano samples a bit more audible (you don't often hear a piano modified that way). The third and final improvisation quickly got into an Indian classical space, with Reuter playing sarod-style slides (and eventually a fuzz melody).

Reuter invited me to check his touch guitar's action just before the second set started (I had told him I was a guitarist). Quite a revelation: the string tension is very low, something you would not expect to look at it. It's not hard to imagine the instrument inspiring a new approach unlike traditional guitar playing, despite the fact that it is designed to be both plucked (the traditional mode of articulation) and played by touch. It's also clear that the sound depends on the player, and here Reuter was engaged in an intimate conversation with his improvising partner Rich, a situation that called for a somewhat different sound than usual. The music they made was no doubt influenced by the intimacy and excellent acoustics of the Springside Concerts setting—as all of the shows I have heard there have been—as well as the fine Yamaha grand piano on site. It was a lovely evening, and well worth braving the elements to attend.