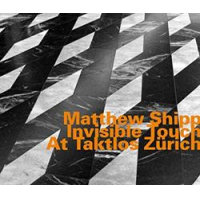 On Invisible Touch At Taktlos Zurich, echoes of the jazz and classical traditions rub shoulders in a bewitching amalgam of insistent phrases, left hand tumult, undulating abstractions and gossamer melody. "No change there then," you might say when considering this installment of Matthew Shipp's solo oeuvre from May 2016. By this stage in his career the pianist was standing as one of the premier instrumentalists in the modern jazz arena, with an utterly distinctive style. That is borne out by the first ten pieces here which run together in a seemingly-effortless, inspired stream of invention, while the eleventh and last is a deserved encore.

Each piece is crammed with kaleidoscopic, fast-changing invention. Taken one-by-one they are absorbing; taken together the effect is overwhelming. Familiar components appear in different proportions and combinations throughout, such that the performance takes on the feel of a suite. But Shipp retains spontaneity, accelerating and retarding tempo as the moment demands, pursuing tangents and shooting at the moon. Even so, the contrasts can be bracing. On "Piece Within Piece" introverted musings give birth to emphatic declamation, as if the result of an internal debate which Shipp has definitively resolved.

Shipp punctuates the ceaseless recasting of his narrative arc with recognizable themes mined from his back catalogue. One such is the boppish, almost Ornettish, bounce of "Gamma Ray," a favorite which also appears on One (Thirsty Ear, 2005) and the solo disc of Art Of The Improviser (Thirsty Ear, 2011). Another, from even further back, is the angular songlike "Monk's Nightmare," resurrected from Circular Temple (Quinton, 1990). He also includes a standard, "Tenderly," previously tackled on I've Been To Many Places (Thirsty Ear, 2014), here given a darkly-rumbling reading, culminating in a series of sustained thunder claps.

The pianist has around a dozen unaccompanied albums in his discography, so why does this one merit attention? In the liner notes, Shipp sums up by saying "I did feel very good about the flow that I got." And he's right.