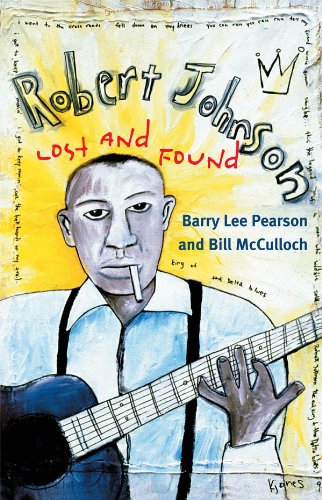 There are two stories surrounding the discovery and marketing of pre-World War II musical recordings in general and 1930s blues musician Robert Johnson, in particular. One is the actual chronology and analysis of events and the second is the research and reportage of the findings surrounding the chronology. Barry Lee Pearson and Bill McCulloch's Robert Johnson: Lost and Found is part of the second of these, using the first as evidence and support.

From the very day that Columbia Records A&R man John Hammond, Sr. wrote about the mysterious Robert Johnson, the myth surrounding the musician began form, evolve, and, eventually, overtake all respectable music reportage. Each subsequent writer, penning an essay on Johnson, parlayed one error after another, until the myth became accepted as fact. This was not the case with just Johnson, but the blues in general. A certain Romantic shadow shaded the blues from the historical truth: all in an effort to make the blues more attractive, mysterious, and marketable.

Finally, after 50 years of scholarship and writing about the genre, the blues enjoys a long overdue polishing, revealing a story no less compelling than that originally conceived and expressed, just more factual, scholastic, and rigorously researched. The most recent scholarship includes: Elijah Wald's Escaping The Delta: Robert Johnson And The Invention Of The Blues (Amistad Press, 2004); Marybeth Hamilton's Insearch of the Blues (Basic Books, 2010); Amanda Petrusich's Do Not Sell At Any Price: The Wild, Obsessive Hunt For The World's Rarest 78 Rpm Records (Scribner, 2014); Steve Cushing's Pioneers Of The Blues Revival (University of Illinois Press, 2014); and Abbott and Sheroff's The Original Blues: The Emergence Of The Blues In African American Vaudeville (University Press of Mississippi, 2017). These books all built on, and corrected, the previous 50 years of blues scholarship, correcting and clarifying much of the myth and superstition marring the official record.

Pearson and McCulloch's book concentrates on a single myth, that of Johnson's Faustian bargain with the Devil, offering his soul in exchange for the ability to play guitar. In excruciating detail, the authors identify and address each published mention of the Faustian deal, paying close attention to sources and intentions while making the reader aware of the cultural and social norms of the period. The story is a Romantic one and its perpetuation a manifold, including self promotion by the artist (Delta bluesman Tommy Johnson sold his soul to the Devil an entire decade before Robert Johnson). In the same way that it would be difficult for a craft beer enthusiast to turn down a brew called "Molotov Cocktail" so would be early blues listeners to resist such a provocative backstory, fantastically augmenting already sexually and spiritually charge music.

What this book does not provide is the quasi-promised story about the story of Robert Johnson. I suspect that book will continue to remain to be written.