By DOUG COLLETTE
November 23, 2019
Sign in to view read count 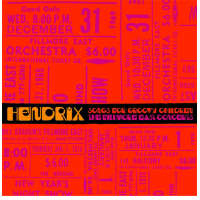 It's a long way from Jimi Hendrix's original Band Of Gypsys (Capitol Records,1970) to Songs For Groovy Children. And it's all by way of Live at the Fillmore East (Legacy Recordings/ Experience Hendrix, 1999) Machine Gun: The Fillmore East First Show 12/31/69 (Legacy Recordings/ Experience Hendrix, 2016). All purported anomalies of its inclusions aside, this five-CD (and 8 LP) set, running approximately five hours, boasts forty-three tracks, restored in sequence from Wally Heider's original recordings, over two dozen tracks of which within never before been released commercially (or have been newly pressed and newly remixed).

Somewhat hastily conceived and executed (and perhaps too much so), Band of Gypsys represents yet another exploratory adventure the likes of which Jimi Hendrix had embarked earlier in 1969. In retrospect, it nurtured that free-wheeling and restlessly curious attitude that arose before the dissolution of the Experience and even as it constituted begrudging assent to fulfill a long-standing contractual obligation, BOG represented radical changes in Hendrix' approach to music in the wake of his rise to fame two years prior. Still, the blues remained a cornerstone of his work, a veritable fountainhead of inspiration on "Hear My Train A Comin''" and "Earth Blues;" the spartan simplicity is all the more striking as remixed by Eddie Kramer and remastered by Bernie Grundman.

However much had its source in various sociopolitical and ethnic communities in existence at the time, BOG was more than just a cosmetic adjustment, though it may well have reaffirmed his impatience with the theatrics of the stage by which he distinguished himself during his management alignment with Chas Chandler (from whose auspices he had departed in 1968). It was more than a little significant for Jimi to work with two other African-American musicians—-bassist Billy Cox and drummer/vocalist Buddy Miles—rather than the British Caucasians of The Jimi Hendrix Experience, Noel Redding and Mitch Mitchell respectively, and his stylistic approach followed suit.

It is certainly worthy of debate whether the presence of this particular rhythm section was the deliberate means to an end or the trigger of the change in Jimi Hendrix' music. Yet there is no arguing groove-oriented songs such as "Power of Soul" and "Message to Love" are a far cry from the more abstract, proto-heavy metal likes of "I Don't Live Today" and "Purple Haze" (the latter would appear at the end of the run). And while "Machine Gun" may well have been a direct outgrowth of the famous Woodstock rendition of "The Star Spangled Banner," its intent was certainly a more direct reflection of the urban violence of the era, as well as the war still raging in Vietnam, not to mention a more viable channel to address the topic (one to which Hendrix also alludes in his spoken word introduction to "Izabella" on night one).

The more democratic stage presentation of Band Of Gypsys was a marked departure from that of the Experience as well too. It is one aspect of these shows that has become markedly more distinct with successive releases of the recordings as the newer material is juxtaposed with material previously-recorded with Redding and Mitchell: while the guitarist/vocalist was virtually uninterrupted focal point of that trio's concerts, the vocal and spoken word spotlights afforded Miles—who had played on Electric Ladyland (Reprise, 1968)—altered the dynamics of both the band and their shows (sometimes to exasperating lengths as on the final night's "Voodoo Chile (Slight Return)").

Clearly liberated from confines of his persona as psychedelic superstar guitar hero, Hendrix nevertheless remained conscious of the recording in process. Thus, at least til the end of the second night, he largely eschewed the stage theatrics he had come to rue (and, no coincidentally, it is a self-restraint he applied during much of the remainder of his performing career. As befits Miles' (and Hendrix) experience with Wilson Pickett, he of are "In the Midnight Hour" "Land of 1,000 Dances" and "Mustang Sally" fame, his self-penned songs, "Changes" and "We Got to Live Together," reflect roots in soul music of a piece with the bandleader's latest originals, not to mention his own history playing for the Isley Brothers.

Emphasis on such material dominated the first two of four shows total recorded at Bill Graham's Fillmore East. Yet Hendrix was in one of the most prolific periods of his career, a facet of the period The Fillmore East Concerts captures arguably more vividly than the posthumous archive titles such as South Saturn Delta (Legacy Recordings/Experience Hendrix, 1997) and People, Hell and Angels (Legacy Recordings/Experience Hendrix, 2013), if only because of the close juxtaposition of so many of these varied compositions such as "Bleeding Heart." And notwithstanding the duress under which Hendrix and company undertook this project, there's a certain joy in the loose approach to "Who Knows" that comes only from musicians having pure unadulterated fun playing together

Hendrix opened his four-show stint with a masterful, eleven song set that did not feature a single song he had commercially released. New material such as "Ezy Ryder" and "Burning Desire" thrilled the sold-out house, but Hendrix would go on to pepper the remaining three shows with ingenious reworkings of favorites such as "Wild Thing" and "Fire" alongside freshly-developed fare. By the time the trio's done with "Foxey Lady" the first night, for instance, they engage in some comping as earthy as it is emphatic, a sound almost as combustible as when, anchored by the thick lines Cox coaxed from his bass, Mitchell's drumming mirrored Hendrix' guitar work in later 1970 concerts.

The eventual reunion of the original Experience a few months later was still born, while the Band of Gypsys' existence of came to an extremely abrupt halt at Madison Square Garden near the end of January. A plethora of candid photos from various sources proliferate in booklet enclosed in this glossy finish box, all of which are interwoven with remembrance from Jimi's old Army buddy Cox and liner notes by author/journalist/filmmaker Nelson George; the combination of prose and pictures is not quite so expansive as the music on which it's based, but it does shed some light on a complicated backstory and at least scratches the surface of the (somewhat forced) joviality in the air around these appearances during a holiday season at the threshold of a new decade.

It also sheds some light on the long-term impact of Band of Gypsys, but hardly so much as the sound of Hendrix' instrument during the concerts. His use of some new technical devices results in wider guitar lines cutting a broad swath through the audio mix with an even sharper edge. Meanwhile, his relish in playing rhythm figures is readily apparent as well, particularly when it alternates with the falsetto vocals on "Stop" (written by Jerry Ragovoy, who also authored "Time Is On My Side" and "Piece of My Heart") or digs deep into the pocket of "Stone Free." And the late rock icon's playing the final night abounds with teases to his early career such as quick snippets of "Third Stone From the Sun" and "The Wind Cries Mary" from Are You Experienced? (Reprise, 1967)

Such are the admittedly nuanced but nonetheless deeply resonant revelations that continue to emanate from the work Jimi Hendrix. Songs For Groovy Children: The Fillmore East Concerts reaffirms yet again his rarefied status as one of those few artists who could transform the merely novel into the truly innovative.