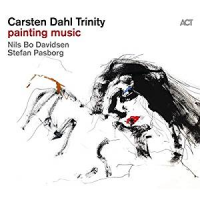 Danish pianist Carsten Dahl uses the liner notes for Painting Music to try to explain the process of creation. "The universe has a sound and rhythm," he says. "Everything moves forward, either powerful and explosive or modest and like slow shadows in a landscape."

The words accompany a picture of Dahl with paint-stained fingers, grinning impishly. "The energy which urges me into an artistic unfolding is the power of the universe," he says, "I am painted or played. I am thrown through these enormous rhythms and through the interference of light and dark and can only act as an instrument. At the same time, I am also like water. Everything moves me and everything mirrors itself in me. Every wind makes the innermost in me sway and under the water an endless depth seeks to be examined. I have never chosen art. It has been sitting on my back like some kind of staurolite."

A staurolite is a red brown to black, mostly opaque, nesosilicate mineral with a white streak. How it came to be sitting on Dahl's back is unexplained.

Painting Music, Dahl's first album for ACT, is not an easy nut to crack. He takes a "less is more" approach to most of the songs, but elaborates to good effect on Harold Arlen's "Somewhere Over The Rainbow." He goes on to dismantle the Danish folk song "Jag gik mig ud en sommerdag" before deconstructing the blues with the self-penned "Bluesy in Different Ways."

Dahl then attacks "Solar," a minor blues attributed to Miles Davis, the opening bars of which decorate the trumpeter's tombstone. Some say the song is based on the chords of "How High the Moon," others claim it is a rip-off of guitarist Chuck Wayne's "Sonny." Strangely, Dahl attributes "Blue in Green," from Kind of Blue (CBS, 1959), to Davis when most critics nowadays agree it was actually penned by Bill Evans.

Be it the staurolite on his back or simply his own wilful desire to explore new directions, Dahl obviously sees himself nowadays as being as much a painter as a musician. Listeners can judge for themselves: the notes include an atmospheric study of Danish philosopher Soren Kierkegaard walking in a winter forest.

Sailing With no Wind; All The Things You Are; Somewhere Over the Rainbow; Jag gik mig ud en sommerdag; Bluesy in Different Ways; Solar; Be My Love; You and the Night and the Music; Blue in Green; Autumn Leaves.