BY DAN BILAWSKY
September 7, 2011
Sign in to view read count 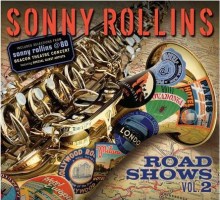 Road Shows, Vol. 1 (Doxy, 2008) was the cure for all that ailed Sonny Rollins fans who were familiar with his herculean abilities in live settings, yet disappointed with some of his studio output. Famous for being his own worst critic, the tenor saxophonist cherry-picked all of the material for that outing, meeting near-universal acclaim upon its release. Now, three years later, Rollins returns with his highly anticipated sequel.

Road Shows, Vol. 2 adheres to the same basic principle, with Rollins putting his stamp of approval on live material that meets his exceptionally high standards, but differs when it comes to timeframe consistency. The performances on Road Shows, Vol. 1 spanned more than a quarter of a century, making it come off more like a sampler than a proper album, and providing fodder for those looking to find something about which to complain; a minor issue that is rectified on Vol. 2. The six tracks that make up this album were recorded within the span of one month, helping to unify its overall aural picture: four tracks were taken from Rollins' now-famous 80th birthday concert at New York's Beacon Theatre on September 10, 2010; the other two, from different shows in Japan the following month.

The Japanese selections bookend the album—a measly sub-three-minute "St. Thomas" sign-off at the end, and a lengthy, swinging "They Say It's Wonderful" at the top—but the real meat-and-potatoes comes in the four numbers Beacon Theatre numbers. On the first of these pieces, Rollins cedes the stage to Jim Hall—his guitar buddy from The Bridge (Bluebird, 1962)—for a short trip through "In A Sentimental Mood," but he makes up for lost time when Hall leaves, the saxophonist's solo proving to be the highlight on "I Can't Get Started." He engages trumpeter Roy Hargrove in spirited exchanges on "Rain Check," which also features some killer chordal solo work from guitarist Russell Malone. While both numbers prove to be gourmet dishes for the ears, the pièce de résistance comes before them. Bassist Christian McBride and drummer Roy Haynes, who performed with Rollins at his 2007 Carnegie Hall Concert, return here on "Sonnymoon For Two," and a surprise appearance from iconoclast-turned trendsetter-turned legend Ornette Coleman makes this a historical recording for the ages.

Road Shows, Vol. 2 serves as a reminder of all that's possible when everything is in its right place for a master musician, playing in the moment. This is firm evidence that the Saxophone Colossus still towers above tenors everywhere.

They Say It's Wonderful; In A Sentimental Mood; Sonnymoon For Two; I Can't Get Started; Rain Check; St. Thomas.