BY DAN BILAWSKY
November 21, 2012
Sign in to view read count 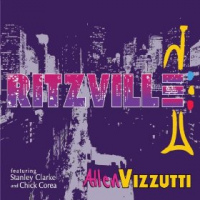 There are very few trumpeters that can do it all and do it all well, but Allen Vizzutti is one of them. His storied career has included stints with Woody Herman's Thundering Herd, pianist Chick Corea, and trumpeter Doc Severinsen's Tonight Show Band. When he wasn't busy playing with one of these top-tier artists, he could often be found delivering master classes, acting as a guest soloist with various groups, or working in the studio, lending his trumpet work to soundtracks or providing semi-anonymous backing for stars as different as singers Frank Sinatra and Prince.

While Vizzutti has recorded as a leader on occasion since relocating to Seattle in 1990, he's kept a relatively low profile, and that's a shame. His creativity and chops have always made him more of a trumpeter's trumpeter rather than a big name star, but he's always delivered when his horn touches his lips and this album is no exception. Vizzutti visits funk territory, contemporary settings, the blues, balladry and more on this well-rounded program.

His reputation as an ear-splitting high note specialist is well-known and he brings this skill to bear at various points during the album, but he doesn't overdo it. He's as likely to woo the ear into submission with his gentle "Touch" as he is to scream and soar. He visits the blues in wonderfully direct fashion, delivering muted magic and sound effects aplenty ("Laura's Blues"), and lets melodic and directional ideas slowly congeal and develop over funky bottoms ("Ritzville"). On several occasions, he utilizes a string section to give the music a polished sheen and smoother sound ("Azure Cool"), but he doesn't let this theme dominate the record. He's just as likely to play some eye-opening, hot horn work over Reggie Hamilton's bubbling bass ("Papa Bear") as he is to work in cooler settings.

Corea and bassist Stanley Clarke drop in as guests and, while Corea's number comes and goes without too much fanfare, Clarke's feature ("Ticklish") is a killer. Drummer Ronald Bruner Jr. takes the kid gloves off and pummels the drums with style and sophisticated aggression. Vizzutti and Clarke both feed off of his energy and refract it through their own respective axes. Variety and virtuosity have always been Vizzutti's calling cards and this record has plenty of both.