By GLENN ASTARITA
December 28, 2016
Sign in to view read count 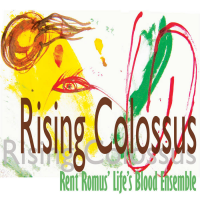 Edgetone Records sent the LP edition of this album that is also available on CD and digital format. Yet I still maintain that most jazz albums are better served via full-bodied analogue productions often equating to a studio-in-your-room experience, coupled with a first-rate turntable and audiophile trimmings that may enhance the listening experience.

San Francisco new-jazz saxophonist Rent Romus leads his Life's Blood Ensemble —which has been an ongoing coalition comprised of alternating personnel —through a program framed on venturesome originals and customized renditions of works by prolific reedmen / composers John Tchicai and Anthony Braxton. Indeed, Romus and associates have reached a milestone with this top-notch outing that defies strict categorizations when considering bridges between free improvisation and modern progressive jazz. It's a seamless incorporation of the best of many worlds.

The ensemble uses depth and numerous modalities as an additive. For instance, on the opener "From the Mouth of Kurantikashtsa a Word Divides the Cosmic Space—I. Moving," vibraphonist Mark Clifford executes a cool, Cal Tjader-like ostinato motif, followed by blaring and festive horns charts and the ensemble's meticulous inner-workings. But Tchicai's "Cherry Vanilla" is assembled with odd-metered and regal horns atop Safa Shokrai's poignant bass lines as drummer Timothy Orr peppers the band with a minor march progression on his snare. Moreover, the drummer is a propelling force throughout the program's chain of events amid his sensitive shadings and ability to provide the knockout blow during the high-strung passages.

Romus' composition "Empyrean City Rising," features fluttering vibes, wily flute interludes, gobs of timbre and developed with a simple theme, augmented by cunning tonal contrasts and geometric patterns. Tenor saxophonist Joshua Marshall's 3-part "Cicatrix -A Fantasie in Four Movements," boasts some democratic perspectives, where each musician has a say, as if they're dynamically attaining a consensus. Here, the soloists convey a rangy stance with weeping horns and a sense of urgency partly due to Romus and Marshall's gritty choruses, counterbalanced by Heikki "Mike" Koskinen's resonating e- trumpet riffs. However, they don't totally forsake melodic input even when they gel in the heat of battle.

The band's diverse stance is further exemplified by its take on Braxton's "Composition 23J," as the rhythm section imparts a bold and snappy pulse after the frontline's rapid-fire shootout, including intricate and vastly complex unison notes and torrid free bop exchanges. Hence, the artists integrate Braxton's mathematically underscored output into a personalized jamboree that rounds out the upbeat aura of these briskly moving parts. With that in mind, Rising Colossus portrays a band that maximizes all opportunities while taking many risks and seemingly hitting all the right notes when navigating from Point A to Point B.