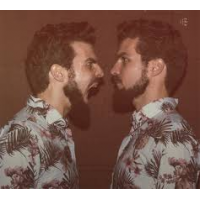 Vitamina D is guitarist André Santos' third album, following Ponto de Partida (2013) and Mano A Mano (2014). Not having heard the earlier two discs, there is little to say here about this latest project in relation to Santos' earlier work.

That said, the cover of Vitamina D gives a good indication of the range of emotions presented by this intense player. On the left is the "raging" Santos, while on the right he appears calm, even sedate. These two sides of the musician are represented in the music, which, even in the softer, less distorted pieces (e.g. "Espanta Espiritos") is quite compressed, very forward-driven and full of pent-up energy.

The tracks are not tunes in the traditional sense —there are melodic fragments, some longer than others, and there is structure along with arrangements, but these and the rhythms used place this music as closer to emotional story telling or sound painting. His guitar playing does not feature many lines in the traditional sense, but rather chordal or melody/chords slabs of sound, sometimes with high distortion. In fact, the linear playing in "Super Mario" stands out exactly because it is not the norm; this track also contains the slickest and coolest groove on the record.

Given the kind of musical universe Santos inhabits, the term "power trio" comes to mind, and the other players, particularly drummer Tristan Renfrow throughout, but also bassist Matt Adomeit in many sections, are very important to the overall sound.

Each tune has sections which flow into each other quite smoothly —the band has obviously played together extensively enough to know where the music is heading at any particular time, with the strong feeling of improvisation. "Rainstorm" is the track closest to portraying nature in its beauty and power, while "Espanta Espiritos" surprisingly somehow evokes the American West with country and blues hints thrown in.

The title track has a little bit of everything: finger picking arpeggios accompany a melody that is quite pretty, but with undertones of danger or darkness. The piece builds continuously during its last third almost crashing down to the recapitulation of the opening, lighter feeling. "Broke Bad" is almost entirely high powered, distorted chordal playing, which is, however, broken up by softer, but just as intense sections which stretch the tension almost to the breaking point.

All of this music is quite idiosyncratic, extremely engaging and continually surprising. Santos obviously has a lot to say, almost to the point exploding to get it out. This band feels like it is going to be together for a long time, as they explore Santos' emotions put to music.