By Dan McClenaghan
August 28, 2010
Sign in to view read count 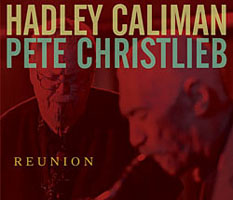 Reunion showcases a couple of old saxophone pros diving deep into the jazz mainstream, backed by an energized rhythm section. Tenor men Hadley Caliman and Pete Christlieb worked together on the Los Angeles Central Avenue jazz scene back in the 1960s, at a club called Marty's, where Caliman was the mentor. Forty-plus years later, they're back together again, on an absolute jewel of a straight-ahead offering.

Caliman's recording career went dormant for thirty years—a drug problem, jail time, rehabilitation, and then the transition into a 22-year teaching career. His recording reawakening began with Gratitude (Origin Records, 2008), and picked up momentum on Straight Ahead (Origin Records, 2010). Both sets are excellent, showing up on many year-end top ten lists, but Reunion, with more fire in the belly and its oft-times "two gunslingers blazing away" atmosphere tops them.

The music begins with "Little Dex," penned by the set's pianist, Bill Anschell. When Caliman was learning his craft in Los Angeles, this was the nickname for his ability to play like the legendary Dexter Gordon. The tune is a full-force battle of the saxophones, a vehicle for Caliman and Christlieb's contrasting styles: Caliman telling his stories in an obliquely eloquent fashion; Christlieb full of roaring, right-in-your-face savage fury.

The set explores Great American Songbook standards, including: Mercer and Van Heusen's "I Thought About You," a smoky room piece of beautiful balladry; and Cole Porter's enduring "Love for Sale," sounding hot and saucy. Caliman contributes the upbeat yet wistful "Comencio," and "Gala," a hot cooker. Christlieb's delivers the rollicking "Nasty Green," and pensive "Dream On."

Reunion is reminiscent of a straight-through, superb Sonny Rollins album, with a tune or two that gets in the head and won't let go: "Little Dex" being one; and "Wide Stance," also written by Anschell, the other. The band roars out of the stall on "Wide Stance," full of implacable power, the rhythm section of Anschell, bassist Chuck Deardorf and drummer John Bishop locking into a powerhouse groove that rings with a bone-shaking, tile walls resonance as the saxophonists go for broke.

A couple of killer sax men and an inspired rhythm team—the mainstream doesn't get any better than this.

Little Dex; Up Jumped Spring; Comencio; Gala; I Thought About You; Nasty Green; Wide Stance; Dream On; Love For Sale.