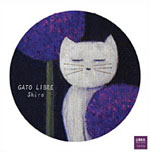 The elemental sadness of Natsuki Tamura's trumpet, as it ascends the temperate scale he has created in "Dune and Star," defines the desolate beauty of Shiro, the fourth album from duo-turned-quartet, Gato Libre. Tamura also evokes the soft colors and textures of dawn, dusk, and the time in between, as if it has been caught in a frieze. His horn—and the manner in which he paces himself on it—recalls Miles Davis' memorable collaborations with Gil Evans. Davis eventually turned his back on that music, ostensibly because it was all "in the past," but that far from types the music on this album as retrograde. Tamura's work here is, at times, as molten as the bubbling lava of a volcano, set to spew its thick and hot stuff on the unsuspecting; at other times, its softness recalls paint forever wet and running down a vast canvas.

On Shiro, Tamura plays with perfect intonation, pacing himself expertly. He enunciates like an orator rolling his "R's," and is seductive as he falls to near silence, save for the sound of his breath, as it passes heatedly through tube and bell. He gurgles at times, perhaps to recreate the rapid movement of a bubbling brook. Elsewhere, he is soft and sensuous, or sharp and incisive as the shimmering edge of a samurai's sword. The trumpeter recalls tradition as much as he breathes contemporariness. He is joined by longtime bassist Norikatsu Koreyasu, with the addition of guitarist Kazuhiko Tsumura, who plays as expertly as a Moorish artist from the heart of Andalusia. Tamura's wife, pianist Satoko Fujii completes the fabulous quartet here with her elongated, sad accordion notes.

There are times when Tamura recalls the aching strains of Nino Rota's music for a Francis Ford Coppola film. This might be a very apt parallel, as Tamura's music is always evocative, and seems to be written with moving visuals accompanying it. His screams, and the silences that follow, almost conjure images of a garroting by a yakuza, as the fading end of "Falling Star" seems to suggest. How else could the music of "Mountain, River, Sky" have been conceived, other than by the horizontal melodies that he sings on his horn, as the other musicians climb vertically on their collective harmonic path? "Waterside" and "Scorpion" dazzle with their imagery of the pastoral, and the menagerie that accrues to that landscape. "Falling Star" has a distinct tinge of the nostalgic, while "Memory of Journey" recalls a caravanserai with the undulating quarter notes that wind up and down its melody, and "Shiro" is a vivid sketch of sharply chiseled features that creates a spectacular end to a very fine set.

Tamura is clearly emerging as one of the finest contemporary musicians and writers to emerge from Japan. His ability to conjure vivid colors and create almost palpable textures on his horn is rapidly making for a new legend that will describe his work for several years to come.