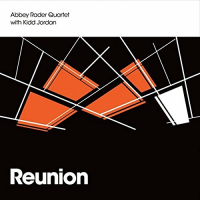 Drummer Abbey Rader first encountered celebrated reedman Kidd Jordan when he was touring with Billy Bang and Frank Lowe back in 2000, as a member of the outfit featured on One For Jazz (No More Records, 2001). Jordan sat in, and the ensuing mix was successful enough for Rader to intend a follow up. That didn't happen until 2012, when Jordan connected with the drummer's regular band in the Miami date documented here. As with Rader's First Gathering (Abray Productions, 2016) the upshot is a freewheeling blowing date without the prop of written material.

But unlike that session the majority of the set is given over to a series of horn solos over rhythm. Given that the playing revolves around the sort of loose grooves which are meat and drink to the likes of Rader and Jordan, you might expect more interaction with the gruff alto of John McMinn or the skittering tenor of Noah Brandmark. And indeed when they do interact the excitement levels increase significantly, and this results in some of the best moments on the disc, whether it's due to the saxophone exchanges or the addition of bassist Kyle Motl's careening bow work to the fray.

As leader Rader sets the cadence and tempo for each cut with an unaccompanied introduction full of chatty cymbals and talking drums. For his part Jordan blends strongly contoured phrases with leaps into the stratosphere, albeit he takes a sensitive approach, not unduly dominating and willing to take his place alongside the other reeds, although his spots are unsurprisingly longer. After Jordan's outing on "New Found Spirits," when others come in to add fanfares it ramps up Jordan's intensity overall.

On the lead in to "Facing The Wall" the drummer recalls the great Ed Blackwell in the distribution of polyrhythms around the different elements of his kit. After Brandmark and McMinn have their say, Rader instructs Motl to bow and as he does so Jordan's soulful falsetto lifts off. It's a lovely combination and again demonstrates the benefits of a second voice. A further upper register saxophone pitches in, then another, baying at the moon, creating a dirge like communion supported by resonant arco and tumbling percussion. Jordan's wavering line on "Talkin,' Burnin,' Prayin'" also evokes a spiritual feeling, provoking a shrieking colloquy when the other horns eventually join, with a reinvigorated Jordan channelling Coltrane at times.