By Nick Catalano
March 31, 2017
Sign in to view read count
For the better part of a decade I've escorted my jazz class at Pace University on trips to Dizzy's to see the Manhattan School of Music Concert Jazz Band perform. The series was forged by veteran jazz academic Justin DiCioccio whose leadership and programming has prompted a rarely noticed success of Collegiate jazz bands across the country. Since DiCioccio's pioneering efforts schools such as Juilliard, Purchase, and Temple have organized similar groups and also appeared at Dizzy's.

DiCioccio's formula—building an evening of big band jazz around the repertoire of a noted composer, arranger, or musician i.e. Sammy Nestico and Dave Liebman—was enormously successful and has inspired talented musicians to undertake jazz studies at universities across the country. Sadly, he has left MSM and his colorful, dynamic, professorial presence will be sorely missed.

On Monday March 27 the band was led by Jim McNeely who orchestrated the band's performance around a series of compositions he had written in Europe a few years ago. A noted pianist/composer/arranger who has played with Stan Getz, Phil Woods and other legends, McNeely has been conductor of the HR Big Band in Frankfurt, Germany and it was in this connection that his composition inspired by the painter Paul Klee was premiered. The music was languorous and harmonically intriguing, as has often been the case with McNeely's writing. Sporadically, there were exciting up tempo spurts featuring the remarkable soloing ability of the students.

In addition to his Grammy award success with the Vanguard Jazz Orchestra, McNeely has spent years in Europe conducting the noted Danish Radio Big band and appearing with the Metropole Orchestra (Netherlands) and Stockholm Jazz Orchestra (Sweden). Hopefully, his European-inspired writing will continue to be featured in MSM concerts and, perhaps, be programmed into the repertoires of the other university jazz groups. And, it will be important for Lincoln Center Jazz to promote more Collegiate jazz as it is one of America's most notable contributions to the arts in recent years. 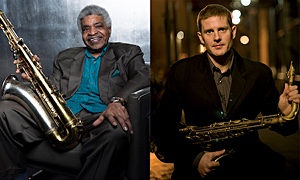