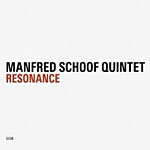 For every artist that has achieved international attention via the exposure of ECM Records, there are countless others who seem to have been lost beneath the cracks. German trumpeter Manfred Schoof, who recorded three superb albums for the ECM- affiliated JAPO label in the 1970s, was a member of the freewheeling Globe Unity Orchestra alongside Peter Brötzmann, Evan Parker, Kenny Wheeler, and Albert Mangelsdorff, all of whom went on to greater acclaim. Resonance collects Scales (1976), Light Lines (1978), and four tracks from Horizons (1980) into a very welcome double-disc retrospective, complete with photos and a brief essay from Schoof.

It's not that Schoof hasn't remained busy; in addition to composing classical works and performing with Dutch keyboardist Jasper Van't Hof (heard on all but four of Resonance's fourteen tracks), the trumpeter can be found on Miles & Quincy Live at Montreux (Warner Bros., 1993). But Resonance, with its combination of outstanding performances from a largely consistent line-up, and writing that's both compelling in its own right and open-ended enough to provide maximum latitude, makes it all the more a pity that Schoof will likely rank as nothing more than a footnote in jazz history; clearly he deserves far better.

The music of Resonance isn't without melody, changes, or pulse—markers often considered verboten during the emergence of free jazz. If anything, there's a clear connection with the music of fellow German Eberhard Weber's Colours group and albums like Yellow Fields (ECM, 1976), but unlike the bassist, Schoof allows the music, at times, to desert form completely. Schoof's appropriately titled "Ostinato" is based around a simple, five-note ostinato, but with van't Hof's near-ambient washes and drummer Ralph-Rainer Hubner's colorful brushwork, it becomes a vehicle for one of Schoof's lengthiest and most impressive solos of the set, recalling Kenny Wheeler's occasional bursts into the stratosphere while avoiding the expat Canadian's melancholic bent. It's also a feature for bass clarinetist Michel Pilz, another Globe Unity alum and sadly overlooked player whose work here is equally striking.

"For Marianne" ambles along with a mid-tempo, waltz-time pulse pushed forward by Hübner and bassist Gunter Lenz; but with van't Hof's economical electric piano accompaniment, it becomes a gentle platform for Schoof's more lyrical solo, even as it builds in strength to an inevitable climax.

With keyboardist Rainer Bruninghaus replacing van't Hof on Horizon's four tracks, the comparison to Weber's Colours is even more complete. The material is, however, largely more assertive than that of the earlier sessions, with its title track descending into some of the collection's most angular free play. That two tracks from Horizons have been omitted is curious, but it can only be surmised as a conscious decision, since there was plenty of room left on the two CDs. It's but a small quibble in a reissue that's long overdue. Hopefully Resonance will remind and reposition Schoof as the more significant player he is, one who never attained the critical or popular acclaim he—or his equally fine group—so richly deserved.