By JOHN KELMAN
February 1, 2013
Sign in to view read count 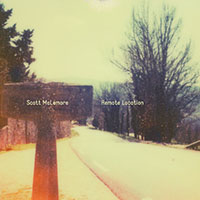 While musicians relocate all the time, moving from the vibrant New York scene to more remote environs might seem an odd choice. After eight years in NYC playing with artists including guitarist Ben Monder and saxophonist Tim Berne, drummer Scott McLemore relocated with wife Sunna Gunnlaugs to her native Iceland following the pianist's decade-plus American stay. McLemore's second album as a leader, Remote Location is his first with an all-Icelandic lineup, suggesting there's plenty of talent on this small island at the nexus of the Atlantic and Arctic Oceans.

McLemore has been a member of Gunnlaugs' groups since her own debut, Mindful (Sunny Sky, 2000), and while the pianist's confluence of pianists like Keith Jarrett, Bill Evans, Jon Balke and Bobo Stenson clearly links Remote Location to her own work, it's McLemore's writing that distinguishes it. As a player, McLemore's focus is clearly on the music; his light touch and intuitive mindset demonstrating a finessed mastery that elegantly drives these nine original compositions without resorting to jarring pyrotechnics.

Instead, McLemore's quintet possesses a depth nearly hidden, at times, by its gossamer delicacy—easy on the ears and unfailing in its melodism, but not without challenges under the hood. Along with the episodic "Citizen Sitting Zen"—which moves from, yes, Zen-like introspection to more energetic terrain, driven by guitarist Andrés Thor's overdriven chords and Gunnlaugs' Wurlitzer—the opening title track is Remote Location's most up-tempo and near-fiery. Still, with Gunnlaugs' lower register chords a fulcrum and McLemore's delicate cymbal work and restrained use of the rest of his kit a pulse, the quintet never breaks a sweat. It might appear straightforward in its repeating 12-bar pattern, but with two bars of five thrown in unexpectedly, everyone is certainly kept on their toes, with saxophonist Óskar Guòjónsson delivering a memorable solo that avoids extremes, his soft but firm embouchure in keeping with the group's—and the album's—gently understated aesthetic.

Thor—whose own Mónókróm (Dimma, 2012) is an overlooked gem of genre-bending writing and playing—is evocative of John Abercrombie's likewise ability to find the nub of the music while avoiding predictable patterns, and employs effects so sparingly and carefully that they often go by nearly unnoticed. Róbert Þórhallsson is clearly as comfortable on contrabass as he is electric and acoustic bass guitars, working, sometimes simultaneously, as harmonic anchor and contrapuntal foil, making every note count when he gets a rare chance to solo.

McLemore reveals some of his touchstones in his song titles: "Balkelero" references Jon Balke's knottier compositional approach before unfolding a more lyrical solo section reminiscent of the pianist's tenure in mid-'80s Masqualero; "Movement for Motian" is a rubato tone poem for the vastly influential Paul Motian, McLemore's similarly textured approach supporting the relatively simple premise of this bass-less closing tribute to the now-deceased drummer.

Iceland's scant 320,000 people may occupy just 40,000 square miles, but albums like Remote Location—its charms revealed increasingly with each and every listen—suggest that something's happening there. With artists like McLemore and his quintet, there's clear reason to keep an eye on a scene slowly beginning to garner attention, in a most characteristically reserved fashion.