By John Eyles
February 1, 2013
Sign in to view read count
Every Friday evening since November 1999, a variable number of musicians—from six to twenty-six—has gathered together in south London for over two hours to improvise together in various combinations from duos upward. Originally convened by AMM drummer Eddie Prevost, and still led by him most weeks, this Workshop has featured hundreds of musicians since 1999 and has apparently never attracted exactly the same combination of players twice.

Although its Friday evening sessions are only open to participants not spectators, in recent years, players who have been regulars at the Workshop have appeared increasingly frequently in concert, having a profound influence on the London scene and beyond. Musicians such as saxophonist Seymour Wright, guitarist Ross Lambert, pianist Sebastian Lexer, violinist Jennifer Allum and cellist Ute Kanngiesser have also released regular albums, notably on Prévost's Matchless label. Now, two releases on the Aural Terrains label include the Workshop regulars electric guitarist James O’Sullivan, Israeli tenor saxophonist Tom Soloveitzik and clarinetist Jerry Wigens... 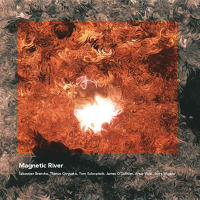 Magnetic River was recorded in April 2011. Across five tracks of improvised music, lasting some forty-four minutes altogether, it combines O'Sullivan, Soloveitzik and Wigens in a sextet with Athens-born pianist (and Aural Terrains proprietor) Thanos Chrysakis, tenor saxophonist Sébastien Branche, and Spanish alto saxophonist Artur Vidal. That line-up of four reed instruments plus electric guitar and piano may raise certain expectations about the music on offer here; if so, the actual music will probably give the lie to such expectations. The most prominent characteristics of the music played at the Workshop are its restraint, instruments often being used to produce atypical sounds, the use of electronics and the focus on interaction between players—all of which are clearly in evidence here.

The mood of the album is set right from the start of the first track, entitled "I"; the players combine small sounds and gestures into a subdued, continually-evolving soundscape in which it is difficult to ascribe individual contributions. So, occasional percussive sounds are most likely to have been produced by the sax players. Rather than conventional piano, Chrystakis favours inside piano, laptop or electronics, frequently providing a background wash of sound behind the recognisable instrumental tones. Individual contributions are short-lived and overlap with others in an effective collective piece.

After the all-too-brief and beautifully gentle "II," the longest track, "III," features the four reeds over an electronic backing—possibly shortwave radio, judging by the sound quality. Following an introductory passage of overlapping short staccato sounds, the reeds gradually introduce longer, mellower notes which combine with the shorter ones into a rich, rhythmically complex piece that makes satisfying listening. Another brief and subtle piece precedes the final track "V" which is replete with recognisable instrumental sounds, not least because Chrystakis plays piano. The six fit together as if they regularly play with each other and, despite its nine-minute duration, the piece flies by and seems to finish too soon, leaving no option but to repeat it again. Yes, music this good demands to be heard over and over.

Paradoxically, on the trio album Syneuma, the three players—the previous sextet minus its three saxophones—create the impression that they are producing more music than the six did on Magnetic River. Chrysakis, O'Sullivan and Wigens are more outgoing and fluent than they were in the sextet. Maybe the trio format was less inhibiting and allowed them more space to play. Anyway, they interact well with each other. But initially, on the track "01," this does not sound like a trio of equals as Chrysakis dominates, playing for the majority of the time—perhaps that is one of the fringe benefits of being in charge of the record label, as well as editing and mastering the album? That is not a complaint, as he is very fluent and easy to listen to as he reels off a piano solo with consummate ease. But therein lies the problem—it sounds like a solo and Chrysakis seems to pay too little attention to the other two who contribute atmospheric accompanying sounds rather than getting their own solo spaces.

On "02," things become rather more equal with the three interacting more and sharing the limelight. O'Sullivan's distinctive percussive playing on the guitar features prominently, as does Wigens' wailing clarinet— both welcome sounds alone or together. However, the change is not permanent; on the eleven-minute "03" the piano dominates again, crowding out the others. As before, it seems a waste of the guitar and clarinet not to afford them more space and time. Some things can only be fully appreciated when they are missing; interaction and equality are two such things.

Thankfully, "04" is a duo feature for O'Sullivan and Wigens, and they grab the opportunity with both hands. Recorded in August 2010, whereas the other tracks date from July 2011, it is the track here that most typifies Workshop-style improvisation with the pair locking onto each other's playing and revelling in their interplay as they share and trade sounds. Fittingly, the track closes to the sound of light-hearted banter and laughter, reflecting the pair's pleasure in playing together. All ends well on the brief "05" as the three reunite, with Chrysakis on vibes instead of piano, meaning he is less dominant. It closes an intriguing album which illustrates what makes for good improvisation. Definitely well worth hearing.