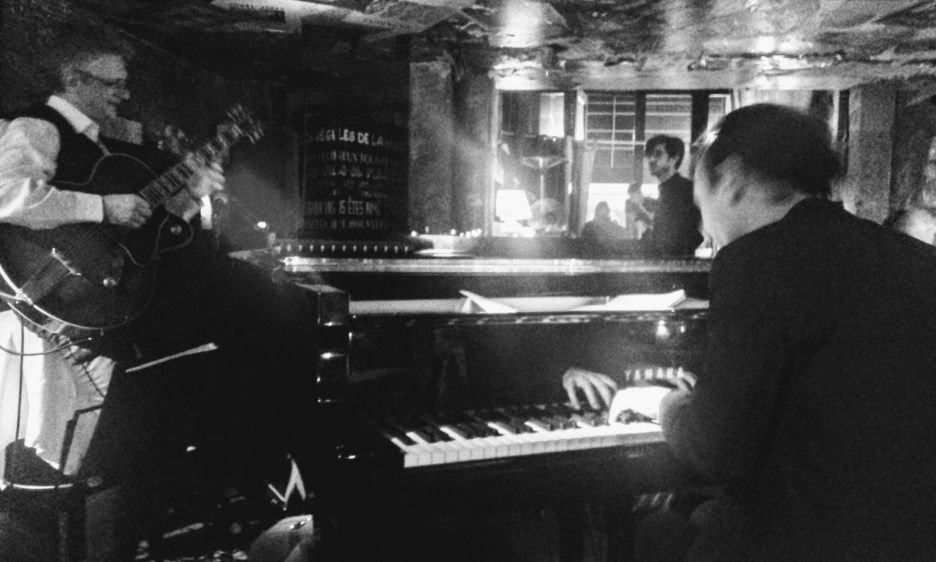 Chez Papa in St Germain des Prés, Paris, is deep in the heart of the Latin Quarter, now one of the most expensive areas in the city. It has an air of 1960s Paris jazz clubs complete with visitor's graffiti, half finished paintings and, on the ceiling, posters of shows long past. The room is high, so a mezzanine gallery has been built for a row of tables, all dressed with bright white table cloths and a candle. It's an intimate supper jazz club atmosphere, watched over by owner Michel Dassaud and his wife for the last 32 years.

On piano Remi Toulon was joined by guitarist Gilles Rea, both well known professionals. They started with "Star Eyes" originally from a 1943 movie, later picked up by Charlie Parker to become a standard. The duo clearly don't play together too often as the short discussion of tune, key and often a hummed reminder of the head revealed, but they truly enjoyed the adventure and smiled as they played in unison. In inventive riffs, Toulon dropped his left hand from the keys inviting Rea to walk a bass line beside him.

They gave a swinging Latin version of "Summer Nights," and a strong "Mo Better Blues" which they both got into deeply. By the time they got to the end of the set, they were into some tight conversational phrases of eight measures back and forth in "Inward Bud."

A solid performance and a good dinner in surroundings of erstwhile youthful rebellion, now considered chic in the city which achieves chic effortlessly.