By Bruce Lindsay
February 20, 2013
Sign in to view read count 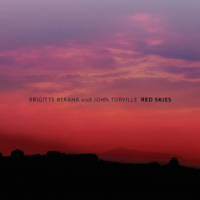 On the sleeve and the CD it's "Brigitte Beraha and John Turville"; on the press release and the electronic data it's "John Turville and Brigitte Beraha." This inconsistent approach to credits has no impact on the quality of the music on Red Skies, of course, but it is perhaps indicative of the ego-free zone inhabited by pianist Turville and singer Beraha, as they bring a fresh and uncluttered approach to some favorite standards.

Beraha and Turville are members of London's E17 Collective. They've won plaudits for their work with players such as trumpeter Kenny Wheeler and saxophonist Gilad Atzmon, as well as for their own albums—Turville's Midas (F-IRE, 2010) gained the Best Album award in the 2011 Parliamentary Jazz Awards. Red Skies, recorded in Italy's Artesuono Studios, represents something of a departure for both of them, with its emphasis on classic Great American Songbook tunes, but this new direction works like a dream.

Beraha's voice has a fragile quality, enhanced by her tendency to sing predominantly in the middle and upper reaches of her range. This fragility strengthens her emotional connection to the songs which are for the most part rather downbeat in their approach to love and romance. She scats and adds wordless vocals to many of the songs but it's her ability to interpret lyrics that gives her performance its real strength—an ability that seems unaffected by her language of choice as she sings in French ("Les Feuilles Mort") and Portuguese ("Beatriz") as well as English.

Turville is an excellent foil for Beraha's voice. As an accompanist he balances Beraha's delicate vocals by giving his playing a contrasting toughness; as a soloist he has an ability to retain the mood of the lyrics and to interpret this mood on the keyboard. He's full-on for Antonio Carlos Jobim's "Desafinado," driving the tempo as Beraha sings with obvious joy; on "My One And Only Love," his playing is more spacious, complementing Beraha's considered yet sensual reading of the lyric. For "Les Feuilles Mortes" (aka "Autumn Leaves," when sung in English) he retains this spacious approach but adds a swing feel that lightens the song's mood. Beraha takes "It Might As Well Be Spring" slowly, lingering over each word as Turville matches the flow of her words and plays a short solo of great charm.

The album takes its title from Beraha's own "Elephants On Wheels," whose melancholy story refers to a "red sky." It's a sign of Beraha's strength as a songwriter that the song sits well alongside the classics.

Bobby Wellins' warm, mellifluous, tenor can make Stan Getz sound like John Zorn. He plays on two songs, "Dindi" and "A Time For Love." Both performances are beautifully-judged, characteristically economical and romantic. Additional contributions from Wellins would have been welcome, but there's such an embarrassment of riches in the interplay between Beraha and Turville that asking for more seems rather selfish. Red Skies is filled with subtle pleasures and understated delights.

Dindi; My One And Only Love; Les Feuilles Mortes; Beatriz; This Heart Of Mine; Elephants On Wheels; Desafinado; It Might As Well Be Spring; Night Game; Moon And Sand; They Can't Take That Away From Me; A Time For Love.