BY ANTHONY SHAW
February 20, 2013
Sign in to view read count 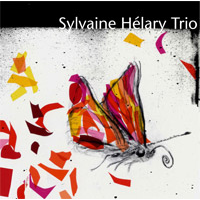 The French have long had an affinity for the surrealistic and the absurd—didn't they invent both expressions? Among the ranks of the leading left-field artists (from, of course, the left bank—the traditions stretch back to Antonin Artauld, the first to promote the first playable electronic keyboard, the Ondes Martenot, and Pierre Schaeffer, who created the expression "musique concrete."

But as a world power the French have also absorbed influences from around the globe, even from across the Channel. Sylvaine Hélary Trio, from this leading modern flautist, is something of collage of influences, opening with an extended treatment of Virginia Woolfe's 1931 novel, The Waves. While Hélary's flute is frequently the dominant instrument, the Sylvaine Hélary Trio also includes strong showings from two of the country's leading progressive jazz musicians, keyboardist Antonin Rayon and his heavily fuzzed Rhodes, and steady drumming from Emmanuel Scarpa. With Hélary's plaintive, often spoken vocals and whimsical themes, the overall sound is often reminiscent of the Canterbury sounds of Richard Sinclair or Henry Cow, though Hélary also ups the ante to berate listeners in their apparent passivity.

A Cross-Channel influence aside, this music has deep roots in classic Gallic jazz. The loopy humor of Gong's Didier Malherbe immediately spring to mind with the bouncy mood and spoken sections of the "Vertige." Otherwise, the following "Ailleurs" (Elsewhere) immediately references Robert Wyatt's Matching Mole with its simple, high alto vocal line repeated over a rippling drum before developing into an investigation of flute experimentalism over a throbbing low, synthesized drone almost lifted directly from Pink Floyd's "Have a Cigar."

Overall, the music reflects the collage style of cover, where a beautiful but slightly disturbing multi-legged butterfly emerges from random blotches of color. The album is comprised of a multitude of intriguing riffs and passages, framed by passages of text in French and German taken from Woolf and Hungarian born Surrealist poet, Gherasim Luca. There's a trip inside waiting to be traveled, but the ticket requires some commitment to dictionary digging. The counter-tempo shouted lyrics in "Quart D'Heure" even evoke Gallic ties with Arabic north Africa, proving the artist's ability to embrace sounds that are typically excluded as the merely background noise of another country's internal disputes. However such is the raw material for truly innovative and challenging art.