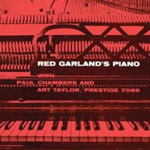 Red Garland (1923-84) is often critically dismissed a cocktail pianist only worthy of tinkling in the background of a lounge, but his depth as a musician is much deeper than that. A member of the first classic Miles Davis Quintet (with John Coltrane), Garland won favor with the bandleader for the way he used musical space, approximating the approach of pianist Ahmad Jamal. As a part of that band, Garland helped shape a good deal of Davis' Prestige output, as well as the trumpeter's first two Columbia releases.

Garland possessed one of the largest songbooks of any working pianist of the period, comparable to that of Art Tatum. The superb Red Garland's Piano (1957) is a testament to his large musical vocabulary and rightly occupies a place among the first ten installments of the "Rudy Van Gelder Remasters series recently inaugurated by the Concord Music Group. There is a certain grace in the way Rudy Van Gelder updates his engineering masterpieces for the digital 21st Century.

Outstanding on this disc and justifying its remastering is Garland's extended over-the-top reading of Percy Mayfield's "Please Bring Me Someone to Love. Garland and bassist Paul Chambers both solo effectively on this, the disc's only blues. Garland largely focuses on ballads, which he dispatches with panache and grace. More than a cocktail pianist, Red Garland proves himself as a song stylist, captured and rendered on this reissue with digital perfection by Rudy Van Gelder.

Please Send Me Someone to Love; Stompin' At the Savoy; The Very Thought of You; Almost Like Being in Love; If I Were a Bell; I Know Why (And So Do You); I Can't Give You Anything But Love; But Not For Me.