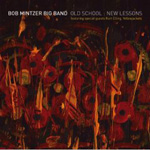 Arranger and saxophonist Bob Mintzer has been nominated for thirteen Grammy awards, not only for his solo work and big band recordings, but also for his efforts with the Yellowjackets quartet, and Old School, New Lessons clearly shows why. The music is original, exciting, energetic and captivating. After a 23-year, twelve-album association with Digital Music Products, Mintzer returns to the MCG Jazz label with this release.

Old School, New Lessons compiles a series of sessions recorded live at the Manchester Craftsman's Guild in Pittsburgh in 2004 and 2005. A major presence in the world of big bands, Mintzer's renowned sixteen-piece orchestra shares the spotlight with vocalist Kurt Elling and members of the Yellowjackets. Elling appears on the only two jazz standards, "My One And Only Love" and John Coltrane's "Resolution." Elling is Mintzer's favorite singer, and the two have collaborated on other projects. His deep baritone voice somehow works well with Mintzer's arrangements.

The Yellowjackets accompany the bandleader on two of the seven original compositions, "Mofongo" and "Mosaic." I found "Mofongo" a rather interesting piece; Mintzer plays the electronic wind instrument (EWI) through a maze of melodies that dip a little into a Latin jazz mode and then re-emerge. "Mosaic" is a beautiful mid-tempo number featuring some torrid tenor solos by the leader and an excellent piano run by Russell Ferrante.

The opening "Not Quite Yet" is a great beginning big band track and one of several powerful arrangements you'll find. The sophisticated "March Majestic" and the percussive, beat-heavy "Go Go" are both contemporary big band tunes with contrasting rhythmic styles. "Runferyerlife" is pure big band swing and swagger from start to finish.

An offering of new and impressive material in the finest tradition of modern big band music, Old School, New Lessons features swing and bop-pop textures, proving once again that Mintzer's music and arrangements are a standard by which others should be compared. While this class is out, I have a suspicion that this music teacher will have a lot more lessons for us in the future. I for one look forward to attending again.