By C. Michael Bailey
March 15, 2006
Sign in to view read count
Rudy Van Gelder has had perhaps the greatest personal impact on jazz of anyone associated with the music without having blown a note himself. Van Gelder served as engineer on essentially all of the recordings made for Blue Note between 1953 and 1967. His engineering work did not stop with Blue Note. Van Gelder was sonically responsible for many more recordings released on both independent and major labels. He has been instrumental in the modern remastering of his original recordings in their conversion from analog to digital formats. His RVG Edition remasterings for Blue Note now number in excess of a hundred recordings.

Van Gelder is now turning his attention to those recordings he engineered that were released by Prestige. In brief, the aural results are a sharpening of both the separation between and timbre of the individual instruments with out losing the "warmth of the original analog recordings. The sonics are overall comparable to the Fantasy Jazz (now the Concord Music Group) 20-bit remastering project that has been going on for several years with the exception of restoration of Van Gelder's judicious use of reverb. Two of the first ten recordings addressed are of conspicuous yet disparate tenor saxophonists. 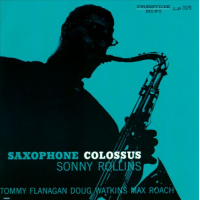 2006 is the golden anniversary of the release of Sonny Rollins' Saxophone Colossus. Corresponding to this golden jubilee is the release of Rudy Van Gelder's digital remastering of the very significant recording. This new rendering perhaps stands out most significantly in the sharpness of Max Roach's cymbals, which in their earliest recording incarnation (vinyl) were muddled and often lost. Now, these cymbals keep Roach's perfect time without overwhelming. This is best heard on "Moritat and "Blue 7. Doug Watkins' bass is better delineated, both in his accompaniment and solos. Tommy Flanagan's piano, while better captured here than on recent re-releases, remains rounded and slightly opaque.

The leader is captured and presented perfectly. Sonny Rollins has one of the most appealing tones of all saxophonists to emerge in the 1950s. Equal parts Ben Webster tempered with Coleman Hawkins, Rollins expresses a well-balanced intelligent masculinity. Conservative to be sure (as opposed to contemporary John Coltrane, who's own tone is overly harsh), Rollins nevertheless fills all of the creative crevasses of his music with a granular magic that can still thrill fifty years later. Saxophone Colossus is bookended by its two masterpieces, the calypso "St. Thomas and the spontaneously erupting "Blue 7. They are superbly transferred into the 21st Century on this recording.

Gene "Jug Ammons represents the full-throated blues school of the tenor saxophone. Closely allied with Von Freeman and Sonny Stitt, Ammons was a disciple of Lester Young and Ben Webster, taking a vibratoless tone from the former and an expansive palette from the latter. The opening "Hittin' the Jug displays these influences readily. Rudy Van Gelder, when originally engineering this piece, added the piquant of reverb that makes the languid blues immediate and striking. Playing unhurried, Ammons allows his huge tone to expand like the foam head on a draft beer. Jug's glissandos in the head are revealed crystalline through remastering.

Jug's sound is accentuated by Van Gelder's tweaking into the digital, the saxophonist's articulation fully exposed on "Close Your Eyes, "Canadian Sunset, and "Confirmation. Tommy Flanagan is better captured here than on Saxophone Colossus. Flanagan's intro to "My Romance exudes class and power in support of Ammons' exceptional ballad sense. Ray Barretto's conga's provide a beautifully articulated arrhythmia to Jug's straight-ahead approach, imparting a bit of the exotic to the music.

These discs are a good start of what I hope is Rudy Van Gelder's piece de resistance before technology changes again, requiring the master's ears when he may no longer be here.