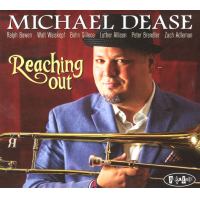 Somebody has to be the keeper of the flame, right? In jazz, an art form that has only recently passed the century mark, that responsibility has seemed to diminish in importance. It's not that music schools aren't churning out graduates versed in the traditional repertory, and post-modern players aren't constantly pushing the envelope of possibilities. It's just that we need more musicians like Michael Dease who, to quote Art Blakey, play jazz that "washes away the dust of everyday life." With Reaching Out, his fifth for Posi-Tone Records (a label whose mission is to throw accelerant on that flame) he doubles down on the joy of music making.

He seems to always find kindred souls who share in his vision, as shown in previous recordings with the veterans Renee Rosnes, Lewis Nash, Steve Wilson, Christian McBride, and Rodney Whitaker. Here, he recruits two giants of the saxophone Ralph Bowen and Walt Weiskopf to interact with some younger talent—players that have the makings of true believers.

What we mean by that is Dease prioritizes the happiness in his jazz. Take the opener, Cedar Walton's "Something In Common," or Steve Turre's "Blackfoot." Both are pieces that are overflowing with a joyful swing. The latter composition, modeled after "Cherokee," is delivered at an auctioneer's hyperspeed with Bowen and Dease chasing drummer Zach Adleman's turbocharged tempo. There is a return to the hipness factor in this music. Dease's original, "The Chameleon Eye," grabs memories of Lee Morgan's funkiness and injects some Herbie Hancock-like rhythm-intensive lines. The composition features the young and talented vibraphonist Behn Gillece (check out his Walk Of Fire (2017)).

What makes Dease stand out is his love of melody and ability to craft arrangements to accentuate such. Perfect examples are the three cover tunes, Babyface's "Water Runs Dry," Paul and Linda McCartney's "Live And Let Die," and the 1990s hair metal band Extreme's "More Than Words." McCartney's title track to the James Bond movie of the same name is given all of the dramatic effect of the original, from it's most gentle beginnings to the soulful dramatics and swinging interludes. All of the covers here could, with lesser arrangements, become schmaltzy or sentimental. But like the masters, Coltrane's take on "My Favorite Things" or Miles' "Surrey With the Fringe On Top," Dease champions familiar music and makes it new again.