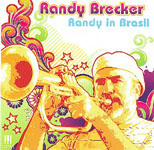 Perhaps unfairly overshadowed by his brother, the late saxophonist Michael Brecker, Randy Brecker has, nevertheless been one of the most significant trumpeters of the past forty years. While his small discography as a leader contains as many misses as it does hits, he's brought a unique voice to countless sessions, working with everyone from Horace Silver, Steve Khan and John Scofield to Steely Dan, Parliament and Frank Zappa, not to mention redefining the concept of fusion as co-leader of Brecker Brothers. Brecker's tone—a curious combination of warmth and bite—and a harmonic approach that, like Scofield, manages to tread the fine line between the in and the out, all the while possessing a keenly constructed melodic sense, makes him immediately recognizable in any context. Recorded in Brazil with a large cast of talented players, Randy in Brasil is Brecker at his most accessible, with style and substance on equal footing.

The lack of a core group often results in a generic sound that looks to the leader for definition, and Brecker's voice clearly gives Randy in Brasil its primary focus. Still, the participation of keyboardist/producer/arranger Ruria Duprat and guitarist Ricardo Silveira on all tracks lends the session a cohesion most "cast of thousands" projects lack. The material is largely culled from popular Brazilian writes including Djavan, Gilberto Gil, Ivan Lins and Joao Bosco, though Brecker's two contributions—the breezy ballad "Guaruja" and up-tempo, samba-esque yet characteristically funkified "Sambop"—fit seamlessly into the program.

The Brecker Brothers often dabbled with broader cultural styles, and Brecker is no stranger to Brazilian music having guested with Flora Purim, Joao Donato and Hector Martignon. Most remarkable about Randy in Brasil is perhaps how he places a firm stamp on the music, with a sometimes pervasive Brecker Brothers vibe despite the lack of a rhythm section on most tracks. Duprat's appreciation for Brecker's distinct horn voicings makes Lins' funky, synth bass-driven "Aiaiai" feel, in fact, as if it were drawn straight from The Brecker Brothers' songbook.

Equally, Brecker adapts effortlessly to the cadence of Brazilian rhythmic forms like bossa nova and samba. There's no denying the Brazilian groove of Gil's bright "Ile Aye," the contemporary vibe of Djavan's "Me Leve" or the light, airy feel of Bosco's "Olhos Puxados." Throughout, Brecker solos with attention to the tune's melodic and percussive essence—navigating his own winding changes on "Sambop" as he constructs a solo of narrative perfection that demonstrates his full range, and displaying equal focus but greater lyrical simplicity on "Olhos Puxados."

As a leader, Brecker's albums have sometimes lacked a clear focus or, in the case of Hanging in the City (ESC, 2001), a misplaced one with his vocal alter-ego Randroid. With its lush sound, beautiful song choices and ideal mesh of Brazilian culture and Brecker's singular voice, Randy in Brasil stands as one of his finest—if not the finest—albums in his long and varied career.