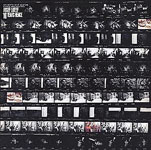 This 2008 release of a live 1975 performance at San Francisco's Keystone Korner may appeal to Lateef completists, but those still new to him or curious about his fame might consider starting elsewhere.

The first of Ten Years Hence's five long numbers is Bob Cunningham's three-part "Samba De Amor," which begins with the bassist bowing and plucking alongside the sound of cowbells, horns, whoops and other vocalizations, and Lateef on transverse flute. Fully five minutes on, a light but entertaining enough samba takes shape. The quiet middle section, "Time Montage," provides a puzzling pause with woodwinds and bells, although something onstage creates a buzz with the audience. The return to the samba quickly dies out, leaving the feeling of a 22-minute long, involved effort that never quite soared.

"Yusef's Mood" follows: a rhythm-and-blues that might be fun from the Keystone's dance floor, but sounds conventional on disc. Pianist Kenneth (Kenny) Barron takes the lead, but despite his dexterity the runs sound labored and the boogie uninspired, never igniting the kind of R&B sparks that shimmered from the keyboards of artists including Leon Russell, Nicky Hopkins, Jaki Byard and Cedar Walton in the mid-'70s. Lateef's sax adds a broad-shouldered presence, but only a few licks and growls give account of his fame. But for the masterful attack, in a blind quiz few would blink on learning that any of a dozen promising turks was blowing.

"But Beautiful" is the only standard, and Lateef plays it with smoky abandon, clearly in his element. Barron comps with Monk-ish splashes and jabs, and the group cooks up a well-spent 12 minutes of jazz. Lateef closes by invoking a slow, supremely confident solo that earns the audience's warmest applause. But Barron's candidly sentimental "A Flower" comes next, and here Lateef plays his flute with earnest tremolo while the pianist paints on ornamentation worthy of Liberace.

The closing number is "I Be Cold"—an inventive piece of considerable charm. Lateef sticks to rapping a soulful moan about how he "be cooold," periodically letting out an odd, humorous bark with the sealhorns. A well-arranged chorus and subdued instrumentation provide loose support for the rap, bass, piano, and those sporadic burps. Despite its spare, repetitive means, this funky 18-minute groove resonates as the album's best-developed original. Along with "But Beautiful," it's a definite candidate for anthologizing. If only the whole session were at this inspired level.

The cover replicates a contact sheet—presumably no picture had the right impact for cover art. The liner notes are almost microscopically small, hampering readability that might clarify Lateef's part, if any, in this release, and the title's meaning.

This is a very eclectic session covering several musical forms, and unlikely to suit every taste. Quite possibly not for purist jazz-lovers, Lateef completists might well enjoy Ten Years Hence's various rewards.

Jazz fanatic with various musical and other interests