BY JEFF DAYTON-JOHNSON
March 28, 2008
Sign in to view read count 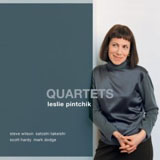 How to keep the exacting piano-trio format fresh sounding? Leslie Pintchik rises to that challenge by making the trio a quartet. Not one or many quartets, but two quartets. The strategy is a successful one.

On five tracks, pianist Pintchik, bassist Scott Hardy and drummer Mark Dodge are joined by percussionist Satoshi Takeishi (the brother of trumpeter Cuong Vu's pile-driving bassist Stomu Takeishi; the mind reels at the thought of a Takeishi-Takeishi duet). The idea here is not so much to create a mini-Latin jazz orchestra, as Nachito Herrera did with the same configuration on his fine Live at the Dakota 2 (Dakota Live!, 2006). Still, it sounds a little like that on Hardy's marvelous, Brazilian-inspired "Fugu," and during the fierce interaction between Takeishi and Dodge on "Too Close for Comfort." Generally, however, the extra percussion gives the piano trio a little extra bottom, the same thing Miles Davis claimed to be looking for when he added guitarist George Benson to his quintet on a few mid-1960s recordings.

The extra-bottom trio is capable of dynamic contrasts delivered with ease: the charging Latin moments already mentioned, but also on the gentle "Happy Days are Here Again," which sounds more like an evocation of the wistful memory of hearing the song than literal performance. Elsewhere, AAJ's Virginia A. Schaefer nicely places Pintchik's limpid "Somewhere" in the context of other piano-based readings.

The remaining four tracks feature Steve Wilson's bluesy alto and soprano saxophones. The cool, mid-tempo "Not So Fast" and the funky soprano sax swirls of "Over Easy" are the highlights of the saxophone quartet. Pintchik's distinctive harmonic sense and phrasing provide coherence between the numbers with Wilson and those with Takeishi.

I've no doubt this music would sound great after hours in a club, but this is best enjoyed as daytime music. An overcast afternoon in the city for "Private Moment"; a crisp, sunny morning walking over a bridge for "Too Close For Comfort." Alert and wide awake, you'll be rewarded with a hundred small and delightful details.