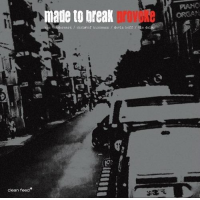 The evolution of Ken Vandermark continues with his new quartet Made To Break, an electric/acoustic ensemble that bridges his musical strengths of composition, organization, and improvisation. Founded in 2011, the saxophonist drew together bassist Devin Hoff (The Resonance Ensemble), drummer Tim Daisy (Vandermark 5, The Frame Quartet, Sound In Action Trio, Bridge 61), and a new contributor, Christof Kurzmann (electronics).

In the early 2000s, Vandermark's interest in non-jazz elements like funk and reggae developed with his Spaceways Inc. trio and electronics with Frame Quartet and Powerhouse Sound, the latter featured Scandinavian noise artist Lasse Marhaug. His improvising, both solo and in duo (with Daisy) also became an important path for him. As he retired these young projects (including the most successful V5), the seeds for Made To Break were planted.

Provoke and the LP (only) Lacerba (Clean Feed, 2013) are the fruits of his latest transformation. Conceived as compositional modules, each lengthy piece is built of blocks or modules of sound in which players improvise within. The music is a more methodical version of John Zorn's Cobra and resolves itself as a democratic version of a Butch Morris Conduction. Opening "Further (for John Cage)" with a simple tenor/drums duet, the piece builds into a heavy funk with the shock of electronics sizzling. The music morphs several times, here and with all tracks, into meditative passages, lyrical (dare I say songlike hymns?) and heavy rock elements. Each module, opens up possibilities of soloing, duos and group interactions. "Presentation (for Buckminster Fuller)" opens with Kurzmann's electronic circuits firing, fizzling and smoldering as an invitation for some strikingly exquisite clarinet that segues into heavy electric bass destruction.

Each module is a cause for spontaneous structures, improvisation on jazz and non-jazz elements, and like all emerging music, some surprises.

Further (for John Cage); Presentation (for Buckminster Fuller); Of The Facts. (for Marshall McLuhan).