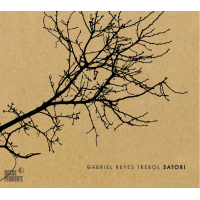 Chilean guitarist Gabriel Reyes' second release as a leader, Satori brims with the visceral effervescence of soul-jazz within the framework of sophisticated and stylish orchestration. The eight Reyes originals that comprise the album are intricately penned with ample room for the individual sextet members to express their spontaneous creativity.

Reyes' emotive unaccompanied guitar serenade opens "El 5," the funk-infused workout that follows features the rhythm section's infectious vamps supporting a chorus of guitar and horns. Out of this basic sonic pattern emerges saxophonist Claudio Rubio's warm and clear tenor as he winds a tight, passionate and intelligent improvisation around the melody. Drummer Nicolás Ríos' exciting and colorful polyrhythms burst to the surface in a thrilling solo egged on by pianist Sergio Valenzuela's sparse, musical alliterations.

The Zen like "Musubi" has an undulating lilt, which Valenzuela's melodic lines punctuate before launching into a romantic, shimmering sonata. His laid back pianism unfolds over a complex harmonic structure adding a contemplative edge to it. Trumpeter Derek Bittner's mellow and muted tone meanders over the percolating cadence of his band mates in a poetic and nocturnesque exploration.

In addition to being a consummate composer and arranger Reyes manifests his prowess and versatility as an instrumentalist. On the title track his stormy and intriguing electrifying guitar work channels strong rock sensibilities. The darkly hued, spiritual piece rests on a stirring tonal framework of bassist Alonso Durán's angular, complex virtuosic pizzicato and Ríos' primal rumbling drums. Elsewhere Reyes brings an earthy touch with his slow simmering strings to the provocative "Enereo" that ends in a delightfully atonal group-play. Meanwhile a cool, guitarist Grant Green influenced, bluesy eloquence is the hallmark of his ad lib playing on the wistful "Spok." Durán's lyrical and resonant bass adds a pensive romanticism to the tune.

With this recording Reyes demonstrates his remarkable and singular skills as a well-rounded musician. Together with his highly sympathetic and accomplished sidemen he has produced an enthralling and sublime work that will stand the test of time.