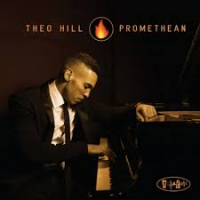 Promethean captures Theo Hill at a significant juncture in his development. The record is ample evidence that the thirty-something New York City-based artist is rapidly securing a place in the crowded field of noteworthy contemporary jazz pianists. On the one hand—particularly during medium and up-tempo cuts such as "This Here," "Hey, It's Me You're Talking To," "Litha," "Is That So," and "Citadel"—youthful exuberance and a cocky certainty imbue everything he plays. On the other, his improvisations are resourceful, well ordered, and hang together as a whole. Hyperliterate, thrill ride choruses are the norm. Throughout the eleven tracks the present state of his art speaks for itself and points to the future. Hill's efforts practically shout out: "This is what I can do now; but stick around, because in a matter of months or a year or so, my music will be in an even better place."

With the exception of one original composition, the program is comprised of material by Bobby Timmons, Herbie Hancock, Kenny Kirkland, Duke Pearson, Tony Williams, Victor Lewis, Chick Corea and Hale Smith. Though these names may be used as a general stylistic compass, they're not an invitation to label Promethean as some sort of tribute record. Hill is way past any sort of fealty to his influences, and so the compositions serve as templates for an impressive skill set.

A precisely calibrated relationship between his left and right hands is a hallmark of Hill's pianism. Generally speaking, the right hand does most of the talking, while the left enacts hurdles to leap over, swerve around, or surmount. Even at his most active, the deep-seated connection between his two hands is apparent and his touch never falters or sounds strained. On the head of Hill's original, "The Phoenix," the chords are as weighty as blocks of granite. Throughout the solo his left hand slices, dices, and chops, while the right feverishly moves forward. In contrast, during portions of Hancock's "Finger Painting," Hill's left hand takes on the character of subtle brush strokes.

Though Mark Whitfield, Jr's rambunctious drumming and Yasushi Nakamura's solid bass lines make significant contributions throughout, Hill's solo on Kirkland's "Chance" shows that he's more than capable of sustaining momentum on his own. In the end, Hill's interpretations of a wide range of material and his exhilarating improvisations make Promethean an impressive recording.

This Here; Hey, It' Me You're Talking To; Finger Painting; I Love Music; Pee Wee; The Phoenix; Blasphemy; Is That So; Litha; Chance; Citadel.