Maximize your visibility at All About Jazz by upgrading your musician page from standard to premium. With it, you'll receive All About Jazz home page exposure, a highly stylized / ad-free musician page with bonus features and benefits, an ad, plus you control where you sell your music and so much more.
Learn More
358 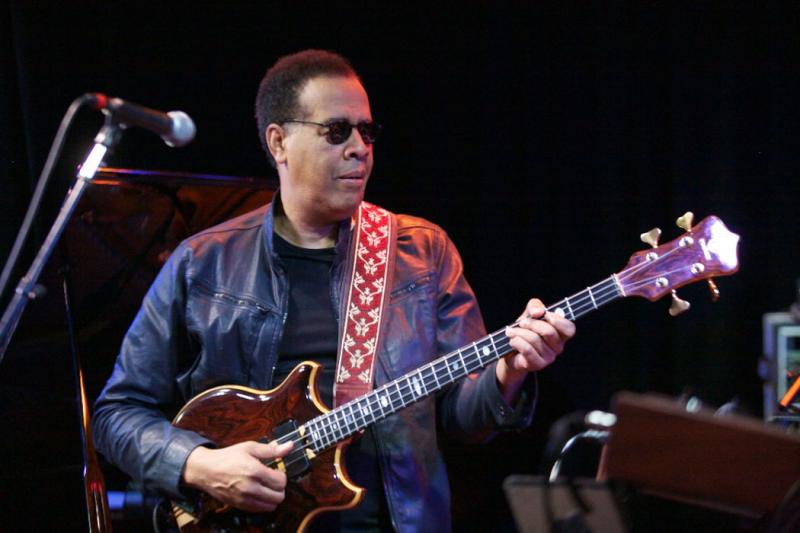 Preeminent bassist/composer Stanley Clarke and his talented band came to the welcoming and intimate environment of Santa Cruz's Kuumbwa Jazz Center for an enjoyable one night only date. The four time Grammy winner's band of young lions consisted of: pianist Beka Gochiashvili, drummer Mike Mitchell and keyboardist Caleb McCambell. Both sold out sessions were packed with appreciative and knowledgeable audiences.

The venue, located in downtown Santa Cruz, was approximately 73 miles south of San Francisco. If driving from the SF Bay Area, give yourself time to take the more scenic Highway 1 along the coast. It will be a little longer, but well worth the time. KJC reminded me of the fabled Keystone Korner in San Francisco's North Beach. (Keystone will be celebrating its 45th anniversary in early July with three special performances in different locations) That small club was located next to a police station.

Tonight's first set opened with extended arrangements for all the songs. Clarke and company kicked off with the electrifying "Lopsy Lu," followed by the Charles Mingus 1959 classic "Goodbye Porkpie Hat," a dedication to the influential saxophonist Lester Young. Clarke showcased his unique bass style on the piece and provided his band mates ample room to make their own sonic statements throughout the invigorating gig. "Black Narcissus" followed "Paradigm Shift." For the encore, some super funky George Clinton "Mothership Connection" was thrown in for good measure to close the first stanza. A long-standing ovation filled the pleasant Northern California sky. Collectively, the band was cooking with the confidence that came from playing together for a while. Time keeper Mitchell was contributing musical paragraphs with his expansive drumming style. His playing had become more expressive since hearing them previously.

During the break, the exceptionally cordial staff happily mentioned that noted jazz artist Christian McBride liked to cook when at the KJC. There was an open patio area with tables and benches for listening on warm summer evenings. Floor Manager Jessi Butler and the entire center staff, including many volunteers, were friendly and enthusiastic about their Santa Cruz location. Unfortunately the gracious Sandy Sloan, Marketing Director, was moving out of state soon with her husband, a sound engineer for the KJC. The couple was leaving for a new jazz facility currently under construction in the Midwest.

After the concert, an excited admirer exclaimed to this writer, "These boys can play! They gotta be from Booker T. Washington!" (Booker T. Washington High School For The Performing & Visual Arts in Texas). Mitchell and McCambell, both from Dallas, studied at the prestigious school.

Clarke commented his band members' artistry had grown since their last visit to Northern California. He said that great musicians have "an arc" as they mature and become more comfortable in the group setting. "The most important thing is that you expand." Tonight, the Stanley Clarke Band presented an exceptional night of music in the superb and cozy confines of the Kuumbwa Jazz Center.

The bassist also indicated artists love playing at Kuumbwa Jazz and many considered it their musical home. He liked the room that included a kitchen (good food), bar, spacious patio and small gift shop. In the James D. Houston article on the official Kuumbwa web site, the author described the success of the venue: "According to Tim Jackson, that was the vision from the outset. He was one of three founding members, along with Rich Wills, who had the original idea, and Sheba Burney. They formed the Kuumbwa Jazz Society in the spring of 1975. Still an active musician (saxophone and flute), Jackson is now the Center's director.

"The guiding idea," he says, "was that jazz is an art form and deserves as much dignity as chamber music or the symphony. Some people still seem to associate it with decadent nightlife and murky dives. It doesn't have to be that way. One important thing you do get from the small club is intimacy with the performers. We wanted to create a venue that combines this with some of the attentiveness of the concert hall."

Where did the name come from? In my view, it provides a key to the spirit of this remarkable place. Kuumbwa is a Swahili word that means "the act of creation." And an appropriate name it is, pointing toward the most distinctive feature of jazz. With art forms such as sculpture, painting, pottery, poetry and fiction, the imagination works in private, and what the audience sees or hears is the end result. With jazz, the artist's discoveries occur right there in front of you, before your very eyes and ears."

The Kuumbwa Jazz Center, located in central Santa Cruz, was an outstanding location for hearing the music of the Stanley Clarke Band on their North American Tour. After seeing and hearing it first hand, you saw why the house was popular with artists and music supporters alike.