By Jakob Baekgaard
July 2, 2014
Sign in to view read count 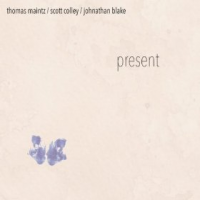 There's a certain trend that has developed on the Danish jazz scene and it keeps growing stronger. In recent years, many Danish jazz musicians have travelled to New York to make a record with some of the top musicians in the city. Danish guitarist Jakob Bro has done it several times, recently with his record December Song (Loveland, 2013) where he once again worked with legendary saxophonist Lee Konitz, pianist Søren Bebe recorded with bassist Marc Johnson on Eva (From Out Here Music, 2013) and saxophonist Christian Vuust enlisted pianist Aaron Parks, bassist Ben Street and Jeff Ballard on his album Urban Hymn (Gateway, 2014).

Danish guitarist Thomas Maintz has also made a pilgrimage to New York to play with bassist Scott Colley and drummer Johnathan Blake and the result is Present that was recorded at Sear Sound with engineer James Farber. It is a luxurious recording where the music is captured in great detail. Blake paints sound with his cymbals and Colley adds his sophisticated grooves filled with perfect little ornaments.

As a guitarist, Maintz is a curious blend between a modernist and traditionalist. He has a relatively clean sound with little or no use of effects, but his dwelling chord progressions and elegant arabesque lines reveal an artist that is interested in texture and he changes effectively between acoustic and electric guitar like Wolfgang Muthspiel. Maintz refines the experiment with a Nordic New York sound that was revealed on Vuust's Urban Hymn. A case in point is "New York Butterfly" that adds a pastoral sound to the pulse of the big city with gently flowing bass lines and breezy swing while "Nocturnal Worm in the Big City" is pure meditative jazz noir with liquid guitar lines glowing like street lights in the night.

Present isn't the sound of a novice that has come to the city to be taught by the masters and prove himself. Instead, it shows an accomplished artist with his own sound who knows what New York and two of its top musicians can bring to his aesthetic and the album is a perfect example of transatlantic cooperation and a trend that hopefully continues.

life in the Key of C; Miller's Watermark; East Village Waltz; For All the Presents I Never Bought You; (Picasso) Nude in Red Armchair; New York Butterfly; Riddles Dressed in White; Very Early; Nocturnal Worm in the Big Apple; If I Should Lose You; Secret Hallway; Sofie's Spring Song.