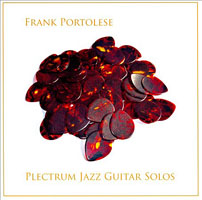 Solo jazz guitar is a harsh and unforgiving lover. The piano provides a more complete performance experience as a solo instrument for technical reasons, though this same completeness can be achieved on guitar by a precious few, talented enough to achieve such artistic parity. Add to this the stipulation that a plectrum (guitar pick) be used in preference to finge-picking, and the number of masters diminishes even further. The touchstone of this brand of playing is, of course, Joe Pass, who was to the plectrum-played jazz guitar as Art Tatum was to jazz piano.

And therein lies the problem. Heresy it may be, but both Pass and Tatum often lacked a stylistic governor on their performance practice, frequently allowing them to veer far into simple technical playing lacking any thoughtful emotional depth. In terms of modern popular guitar, Joe Satriani, Steve Vai, Eric Johnson, and Yngwie Malsteen all suffer from this propensity toward simply playing to show off.

It is for this reason that Chicago jazz guitarist Frank Portolese's self-produced Plectrum Jazz Guitar Solos enters as an important traditional jazz guitar document. His repertoire is familiar, to be sure, but his performance philosophy is tastefully restrained. Portolese has the chops to be as verbose as Pass—veering very close, on occasion. But he always stops short, giving his performances greater gravity and lasting value.

Harold Arlen's "Over The Rainbow" properly opens the disc. Portolese treats the song gently, after some Eddie Diaz-esque arpeggios; largely chording the melody with single-note filigrees. "Topsy" rocks with Hot Club fervor, while "As Time Goes By" reveals its internal charms in Portolese's exact chording. "Limehouse Blues" and "St. Louis Blues" exist side-by-side, offering a grand comparison between the jazz age of the 1920s and the slinky W.C. Handy standard from the decade before. The latter blues exists as hyperbolic focus of the disc, bookended with an over-the-top "Black and Tan Fantasy."

The disc closes with an all-American trilogy. "Stardust," rendered electrically, is beautifully wrought by Portolese, his finger-picking intermingling with his plectrum, showing the style of a master. "There Will Never Be Another You" is chorded lushly, interspersed with single-note runs that never fly off the handle—only seeming to. "America The Beautiful" is played straight and with reverence.

Recitals like this are few and far between, making Plectrum Jazz Guitar Solos a not-to-be-missed album.

Over the Rainbow; Topsy; As Time Goes By; Limehouse Blues; Saint Louis Blues; It's the Talk of the Town; The Sweetest Sounds; New Orleans; Black and Tan Fantasy; Stardust; There Will Never Be Another You; America the Beautiful.