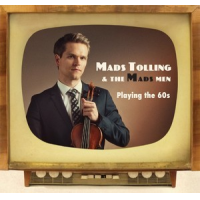 From the first arco tones, something sounds very familiar, yet hard to identify. The tone in question is big and full, dry, but not too much so. Were this tone a libation, it would be an Old Fashion. Sleek and commanding, yes, this makes me think of Svend Asmussen. This should be no surprise both wunderkind Mads Tolling and Asmussen are Danes with solid technical ability on the violin and a prodigious knowledge of the jazz songbook. Assmussen has just celebrated his 100th birthday and I wish him many more. But I am glad to live in a world that produced Mads Tolling, because he is something special.

Classically trained as violinist, Tolling presently lives in San Francisco, where he had stints touring with jazz bassist Stanley Clarke and spending eight years as first violinist in the Turtle island Quartet. Having always had a band, now Tolling turns to music making with an intention of addressing a complete musical package, production, programming, and performance. He does this by taking advantage of the recent success of the seven-season AMC hit program, Mad Men. Spanning the entire decade of the 1960s, Mad Men's producers paid scientific attention to the period, recreating it right down to the smell of unfiltered Lucky Strikes and bourbon. The 1960s was the decade of my childhood and early adolescence. Though my circumstances as gawky Southern Roman Catholic could not have been further from Manhattan, the world reproduced in this series was one very familiar.

Particularly in music. Tolling populates Playing the 60s with songs I heard an infinite number of times on AM, and then FM, radio. Opening with "A Taste of Homey" from Herb Alpert and the Tijuana Brass' 1965 Whipped Cream & Other Delights (A&M Records), Tolling and his Mads Men turn a mid-60s pop confection into what approaches the Avant Gard in the solo sections. "Meet the Flintstones" in this setting belongs in the Star Wars bar scene. "Georgia on My Mind" is so saturated with the blues, one wonders if Tolling can find his way back from that Nietzschean abyss, but find his way back he does serving up a sensual, almost cosmic "The Pink Panther," sporting an almost perfect bass solo from Sam Bevan, who also serves as arranger, with Tolling. Bevan extends Martin Williams' definition of swing (..."any two notes played in succession by Paul Chambers) into his realm. In the coda, Tolling's violin sounds like a harmonica. That is some trick.

Tolling's nod to the 60's counterculture comes in a provocative reading of Bob Dylan's "All Along the Watch Tower." Like Gov't Mule's performance of the same, Tolling injects the piece with Jimi Hendrix's solo, thus closing the creative circle. Playing the 60s is a high wire act one cannot believe will not fall apart at any moment. The end of "Watchtower" becomes a solid Latin salsa seamlessly. The "Mercy Medley" celebrates Joe Zawinul's classic soul-gospel-jazz piece, propelled by Colin Hogan's precise electric piano, mashed up with Don Covay's "Mercy, Mercy" and Marvin Gaye's "Mercy, Mercy Me." This is stellar performing. Tolling's playing is near unbelievable. "Mission Impossible" may the best of a list of best performances, again punctuated by Bevan's throbbing bass. Playing the 60s is more than a simple exercise in nostalgia. It is popular music brought into jazz in such a way that the music transcends itself, at that point where the creative blade is losing electrons from its finely honed edge while folding in on itself. Wes, this music is that good.

A Taste of Honey; Meet the Flintstones; Georgia on My Mind; My Girl; The Pink Panther; All Along the Watchtower; The Look of Love; Mercy Medley; Mission Impossible; A Time for Us; The Good, the Bad and the Ugly; What a Wonderful World; Peter Gunn; Hawaii 5-0; Beautiful Savior.