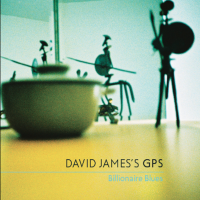 A community of independent-minded creative musicians persists in Northern California in spite of skyrocketing rents, the collapse of the Fillmore Jazz District, and the flight of fellow artists to points south (L.A.), and East (New York, Europe). Most of the new jazz music written and performed in the Bay Area is not commercially recorded or marketed to the broader American jazz audience. The responsibility to document their work rests with the musicians themselves.

David James's GPS—Billionaire Blues, the first CD under the leadership of guitarist-composer David James, was recently designated one of jazz critic Francis Davis' "Best Debut" CDs in his review of albums released in 2016, a well-deserved accolade for a set of thoughtfully composed, boundary-blurring new music.

The development of the recording was assisted by a grant from the San Francisco Friends of Chamber Music, and supported by the enthusiastic participation of clarinetist-composer Beth Custer and bassist Lisa Mezzacappa, well-respected instigators in the Bay Area new music scene. David James, who has toured with singer-activist Michael Franti's group Spearhead and regularly performs with the group Afrofunk Experience, is a member of Beth Custer's ensemble and a prominent contributor to her recent release For the Grace of Any Man. Two of James's compositions that appear on Billionaire Blues were previously recorded with different musicians on For the Grace of Any Man, and Custer's wide experience writing and performing new music for silent films, theater and dance, provided a stage for the guitarist to step into the composer-bandleader spotlight.

"2 Zs, 2 Ps" opens the disc with sustained chords divided among the clarinet, trombone, viola and bowed bass—the first indication of an approach to ensemble arranging cut loose from the keyboard. Unaccompanied trombone introduces the head melody, then doubled by plucked bass. The entrance of a Hendrix-y guitar counter-riff doubled by pizzicato viola over subtle drumming from percussionist Jan Jackson sets up a swinging, post-rock groove, and a bluesy statement from trombonist Alan Williams harmonized by the clarinet steers the group into jazzier waters. James solos with a funk sensibility over interlocking lines from the winds and the solid groove of the rhythm section. He's not aiming to shred his guitar frets—you sense that he listens as carefully as he speaks.

Throughout the set, solo space is granted to each member of the ensemble. "Black Ops" highlights Williams' gutsy trombone, while violist Dina Maccabee adds euro-jazz flavors to the mix. Custer's the focus on "Wag the Puppy," a feature for her playful, dancing clarinet lines. The light-hearted Ellingtonian theme of "Obama Hop" makes a sharp contrast to the reflective "Prayer" that follows, as the jubilant optimism of an earlier presidential inauguration succumbs to the sober contemplation of an uncertain future.

Artists today rely on social media, streaming music platforms and online jazz magazines and blogs to catch the attention of prospective listeners. There are hundreds of independently produced and self-or small-label distributed new music CDs and downloads released every year, many drawn from live performances—an inexpensive proposition with today's laptop-computer technology. Running against the trend, Billionaire Blues was recorded in well-rehearsed studio sessions by noted Bay Area sound engineer and trombonist Jeff Cressman. A member of the Carlos Santana Band and staff engineer at SF Jazz Center (which has state-of-the-art PA and recording facilities), Cressman is the first choice sound engineer for a long list of Bay Area jazz and new music artists.

James writes about the sessions: "The band record[ed] live without headphones—only hearing one another in the room. The challenges presented by recording this way (and the challenges of then mixing such a recording) were outweighed by the natural feel of the process, which made for a deep listening and extra-attuned responsiveness between the musicians."

That responsiveness between the musicians, the CD's outstanding sonics, and most important, the vibrant energy that David James and the ensemble bring to the music, make this release stand out from the crowd.

I enjoy writing about new music and classic reissues with a focus on the artists, producers, engineers and labels who are committed to hi-res SACDs and audio downloads.