BY KARL ACKERMANN
January 19, 2017
Sign in to view read count 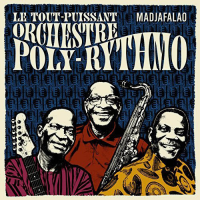 Le Tout-Puissant Orchestre Poly-Rythmo is a difficult ensemble to follow. For one thing, they have functioned under the names Poly Rythmo de Cotonou, TP Orchestre Poly-Rythmo and L'International Poly-Rythmo among others. Add to that, a frequently shifting line up, a series of serious misadventures, a long period of dormancy, and their lack of familiarity outside of Benin (in West Africa) is understandable.

Saxophonist Mélomé Clément founded the group in 1968 and they went on to substantial success in West Africa, releasing more than fifty albums into the late 1970's and adding "poly-rythmo" to the name to signify their trademark skill. The untimely deaths of Clément and two other original members coincided with the rise of a repressive dictatorship in Benin and sent the band into a semi-reclusive status, playing mostly weddings and military parades. The complete extended hiatus began in 1982 when the group played Festival of the Arts Negres in Tripoli, Libya. Suspected of smuggling alcohol into the country, Muammar Gaddafi's troops searched and destroyed their equipment and found nothing. Le Tout-Puissant Orchestre Poly-Rythmo did not re-emerge on record until 2011's Cotonou Club (Strut Records). Madjafalao is their third album since the reformation.

From their original founding, the group has avoided a strict esthetic focus, opting for combinations of funk, Afro-beat, syncopated rhythms and contrasting melodies, and traditional West African, Dahomey music. The latter contains a strong element of vodun or—as we know it—voodoo. Madjafalao is populated in a similar fashion opening with the swinging, horn-heavy title track. The more percussive "Wangnigni" follows, highlighted by Vincent Ahéhéhinnou's urbane vocal style. "Heritage" owes much of its influence to the traditional "highlife" style of Ghana while "Finlin Ho" is a slower tempo folk-oriented piece with fine guitar work from Bentho Gustave and Maximus-Unitas Adjanohun. A high point of the album is groove-acclimated "Africa Lonlon" with infectious rhythms and full group participation.

There are two particular factors in the appeal of Madjafalao; one being the palpable sense of joy that these musicians maintain even in the face of a personal history so treacherous that we can hardly imagine the experience. The other interesting element is that this is the region of the world that gave us jazz; perhaps not in its full-blown conventions, but listen just beneath the surface and you will hear West Africa's contribution to the genre.